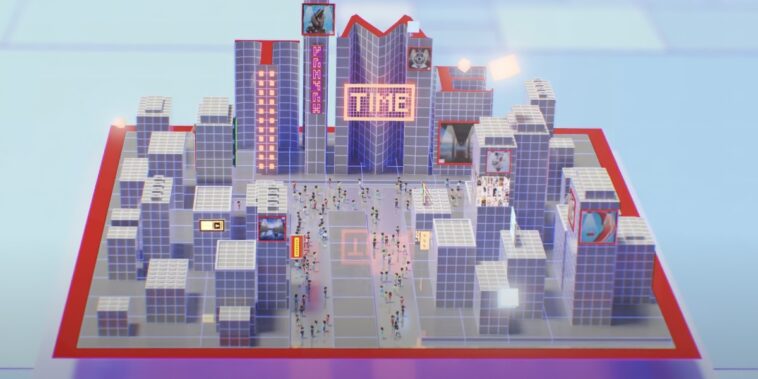 During NFT.NYC, TIME President Keith Grossman revealed the company has partnered with The Sandbox to build TIME Square. This digital version based on NYC’s landmark destination will be constructed on the TIME plot in The Sandbox metaverse.

This project is TIME’s first venture into constructing a building or experience in these shared, virtual worlds. Grossman said that the goal is to create a “destination at the heart of the metaverse.” It will serve as a place of social gatherings, art, and commerce.

TIME Square will also be an intersection of a few TIME areas of interest, including the TIMEPieces virtual community, the global relationships and coverage of TIME Magazine, and the intellectual property from TIME Studios. The holders of TIMEPieces NFTs will lead the search for an architect.

TIME launched the TIMEPieces collection in 2021 and continues to build on top of it, offering opportunities for NFT enthusiasts to participate in TIME’s Web3 community. TIMEPieces NFT holders will also uniquely gain from constructing TIME Square in The Sandbox. There, TIME will provide access to discussions, screenings of TIME Studios projects, and educational experiences.

Sebastian Borget, the COO of The Sandbox, said that people often look at the metaverse as a “virtual Manhattan” or a place where people can congregate and meet new people, a virtual destination alive with culture and energy. TIMEPieces will become the “beating heart and soul” of The Sandbox, a location where creators and brands can connect.

There is no date set for the start of the architect search, according to the TIMEPieces website.

The Sandbox Has Been Busy with Partnerships in 2022

Because it is one of the top metaverses, it might not surprise that The Sandbox has been busy with partnerships in 2022. Its voxel-style graphic renditions and builder-friendly modes make it attractive to NFT projects and mainstream organizations, and its 2022 partnerships lay credence to that. Here are three major companies that have jumped on The Sandbox bandwagon this year.

The first is the film studio Lionsgate. A few days ago, The Sandbox revealed that the studio’s movie “Hellboy” would be the first to appear in an area of the metaverse called “Action City.” Lionsgate, through the deal, became the first film studio to partner with The Sandbox.

The second is none other than Paris Hilton. At the South by Southwest festival this year, the NFT collector revealed that her company, 11:11 Media, had partnered with Animoca Brands, The Sandbox’s parent company. As part of the deal, she received virtual land parcels in the metaverse and an official The Sandbox avatar designed to her likeness. While there is no word about what she plans to do with the land, fashion shows and NFTs are possible.

The third is one of the more popular NFT collections — World of Women. Three months ago, the team behind the project announced it had partnered with The Sandbox as part of an inclusivity push. The team will make all 10,000 WoW NFTs voxel avatars and build a World of Women museum on a 2×2 The Sandbox land parcel.

Time will tell how the building of TIME Square goes, but given the resources The Sandbox and TIME have, it could be pretty spectacular when finished.