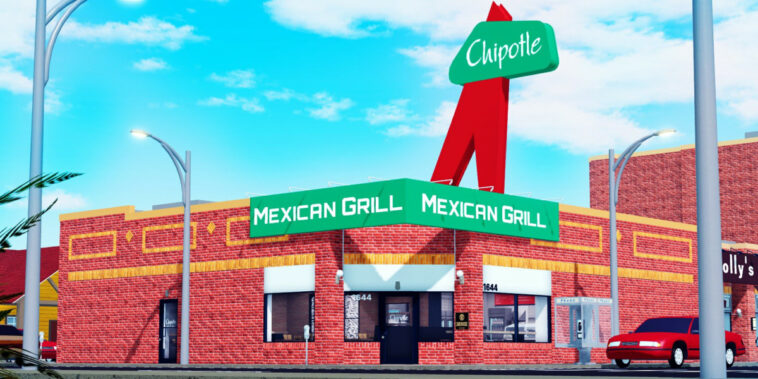 Chipotle just “rolled out” a virtual Burrito Builder game in the metaverse. To celebrate National Burrito Day, the Mexican fast-casual chain partnered with Roblox to launch the Chipotle Burrito Builder.

Starting at 3:30 PT on April 7th, Roblox players could test their burrito-rolling skills and get paid in “Burrito Bucks.” People could use this digital currency to unlock special IRL promos and virtual items within Chipotle’s new Roblox simulation.

To entice Roblox players to try the Chipotle Burrito Builder, Chipotle offered a “pay increase” to the first 100,000 people who rolled a virtual burrito. Players in this group got all the Burrito Bucks required to claim one free entrée via the Chipotle app.

If players weren’t quick enough to claim the initial free entrée, Chipotle will give away more burritos to the most dedicated Roblox employees. From now until April 13th, the five “Burrito Builders” that score the highest by 11:59 PT each day will get literal burritos for one year. Please note: This contest is only available to US residents.

Even if you don’t want to play Chipotle’s new game, you could experience a unique Roblox-themed menu item in Chipotle restaurants. Roblox users voted on what ingredients should make up the “Chipotle Burrito Builder Burrito” at the start of April. As of April 7th, adventurous patrons could give this new fan-created burrito a try by ordering via Chipotle.com or the Chipotle app.

While the Chipotle Burrito Builder is an ambitious metaverse project, Chipotle has previous experience with the Roblox team. Last year, the California-based chain introduced a Halloween-themed “Boorito Maze” in Roblox’s metaverse. Like the Burrito Builder simulator, visitors to the 2021 Boorito Maze could win free menu items or discounts at Chipotle’s restaurants.

Also in 2021, Chipotle introduced a crypto-themed promotion called “Burritos or Bitcoin.” To commemorate last year’s National Burrito Day, the chain released a game where players had to guess a passcode to access their “chiptocurrency.” If successful, players could have won free burritos or either $500 or $25,000 worth of Bitcoin.