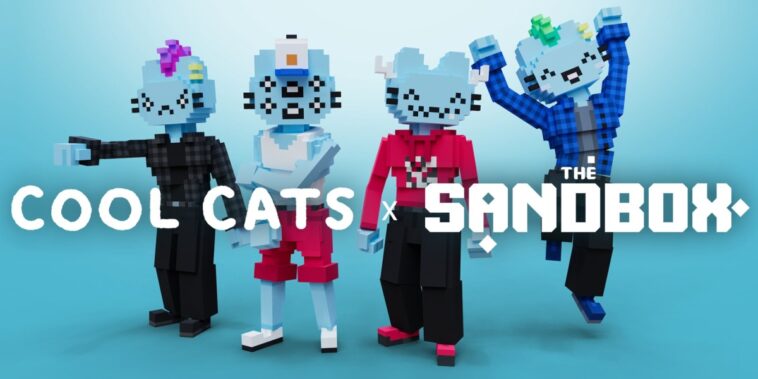 Although this announcement was light on specifics, the Cool Cats team expects to drop these new NFTs in “early Q4” of 2022. Cool Cats also tagged “@TheSandboxGame” and suggested its “conversations” about a partnership with the game were “finalized.”

Throughout May, Cool Cats has tweeted many mysterious polls and pixelated images like “squad sunglasses.” It’s clear now that these were all a tease for the recent Sandbox reveal.

At this point, it’s unknown whether Cool Cats holders will get special access to the upcoming Cool Cats avatars. There’s also no word on whether these Sandbox NFTs will play a role in Cool Cats’ “Cooltopia” game.

However, Cool Cats mentioned this upcoming partnership will bring many “fun opportunities” to Cool Cats “holders.” Cool Cats encourages anyone interested in this partnership to “stay tuned” to its social media feeds.

Since its launch in 2021, the 9,999 Cool Cats NFTs have gained prominence in the “cute” & “family-friendly” categories. Early on, celebrities like Reese Witherspoon and Mike Tyson proudly displayed their Cool Cats avatars, which helped increase the appeal of these NFTs. Cool Cats is also one of a few projects that sold a single NFT (Cool Cat #1490) for over $1 million.

The Cool Cats are so big that Bored Ape founder Yuga Labs put one of these blue cats in its “Otherside” ad. It’s unknown how Cool Cats will integrate into Yuga Labs’ metaverse, but the cameo certainly bolstered Cool Cats’ “blue-chip” status.

As hinted above, there’s now a Cool Cats-themed play-to-earn game entitled “Cooltopia.” Cool Cats released a second NFT collection called “Cool Pets” that holders can use to play quests and earn rewards in this new ecosystem.

Over the past few months, Cool Cats has tried to bring its IP to a broader audience by partnering with TIME Magazine and the toy company Toikido. LA’s Creative Artists Agency recently agreed to help Cool Cats explore new media opportunities, including films, books, and TV shows.

It also appears the cast of characters in the Cool Cats family will soon expand. Cool Cats tweeted images of many colorful characters in its latest roadmap, including a red bird, a gray dinosaur, and a purple-and-white cat. The team also claims there will be more NFT airdrops and exclusive merch opportunities for Cool Cats holders.

There seems to be no stopping the Cool Cats’ expansion within and outside Web3.