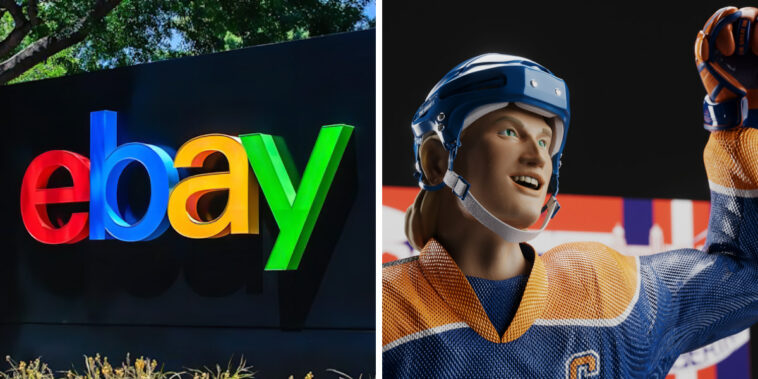 eBay, the resale and e-commerce giant, has entered the world of non-fungible tokens. Its first collectible set is a homage to one of the sport’s greats — 3D animations of Wayne Gretzky. The NFTs are split into four tiers, with the lowest costing just $10 and the most expensive being $1,500.

Dawn Block, vice president of collectibles at eBay, said that NFTs and the blockchain are “revolutionizing the collectibles space.” She added that many enthusiasts view NFTs as investment opportunities. eBay is now making these NFTs available to a new generation of collectors.

To handle the drop, eBay has partnered with multi-chain NFT platform OneOf. Usually, OneOf organizes its NFT launches on the eco-friendly Tezos blockchain. In this case, OneOf will launch on the Polygon, a Layer 2 blockchain that sits on top of the Ethereum chain. It is also considered “green,” with the company behind Polygon publishing a “green manifesto” earlier this year.

Wayne Gretzky, widely considered the greatest hockey player of all time, said he is “honored to bring this collectible experience” to his hockey fans, some of whom have followed his career for decades.

Although Gretzky is the athlete featured in this first drop, he won’t be the last. The partnership between eBay and OneOf involves a third party — Sports Illustrated. The athletes shown in this NFT series will be those who Sports Illustrated highlighted on its cover. One potential name floated for a future NFT series is Dick Butkus.

Lin Dai, the CEO of OneOf, the company’s software and eBay’s will integrate for a “super easy NFT purchase experience.” This partnership will help OneOf fulfill its goal of bringing 100 million people to Web3.

In the past year and a half, the sports industry has been one of the leading advocates for NFTs. People largely credit NBA Top Shot, a product of top NFT company Dapper Labs, for starting the NFT bull run in 2021. And Sorare has become incredibly popular, often amassing sales in the hundreds of thousands of dollars.

But a niche within the sports industry has reaped the most benefits: sports superstars. On NBA Top Shot and Sorare, the highest sales are typically stars at their peak or young stars flashing incredible potential.

Individual sports stars have tried to capitalize on their fame by launching their own NFT collections. LeBron James partnered with Crypto.com to release an NFT set based on the company’s Super Bowl commercial. Acquiring the NFTs involved finding a QR code, scanning it, and having the NFT airdropped into a Crypto.com account.

Finally, Tom Bracy launched a marketplace called Autograph that pairs together star athletes with their fan bases. On the site, users can collect NFTs specific to an athlete. These NFTs often come with perks that the average fan wouldn’t typically see.

Time will tell if EBay’s foray into NFTs is successful, but there’s no doubt that the relationship between sports and digital collectibles isn’t dying anytime soon.