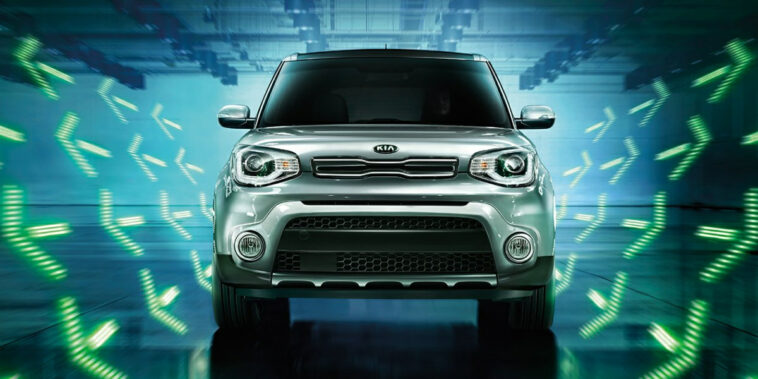 Kia Motors, affiliated with the Hyundai auto group, has become the first automaker in South Korea to release non-fungible tokens modeled after its electric vehicles.

The auto company describes the six NFTs as digital artwork, with two NFTs each based on one of three EVs. They will be available for purchase a week from March 26th on the NFT art market called Klip Drops using the virtual currency unit Klay. The blockchain wing of web giant Kakao runs Klip Drops.

Kia Motors issued a press release through the Korean news service about the NFT drops. The names of the six NFTs are “Opposites United of EV6,” “Aesthetics of Completion,” “PORTAL,” “Aluminum Allure,” “Sustainable Movement,” and “The PROCESS.”

The main themes of the artwork celebrate eco-friendliness, complete with symbolic moving lines and brushwork, and the technical prowess of the vehicles, such as the wide curved display of the EV6. Each NFT has been priced at 350 Klay or roughly $399.

No one in Kia Motors has issued a statement about the drop.

South Korea and South Korean companies are no strangers to Web3. As Rarity Sniper previously reported, South Korea plans to invest 223.7 billion Won ($186.7 million) into the metaverse. The plans include a state-sponsored metaverse, virtual cities, and digital infrastructure.

Another big South Korean company — Hyundai Oilbank — shared plans earlier this year to build a virtual energy station, where individuals could “fill up” their vehicles with gasoline, diesel, or more energy-efficient materials. The goal was to include various features to the energy station, including outdoor seating.

Therefore, Kia Motors’ launching of NFTs modeled after electric vehicles is perhaps no surprise. But it does indicate another trend — the meshing in some way of digital NFTs to physical pieces.

This trend has grown throughout 2022, with some companies selling real estate, vehicles, and even yachts linked to NFTs. Others have gone the traditional route and represented a physical object within an NFT, as often seen in Tom Brady’s Autograph marketplace.

Time will tell if Kia Motors’ foray into NFTs is successful, but as more companies jump into Web3, it goes without saying that this trend isn’t going anywhere anytime soon.