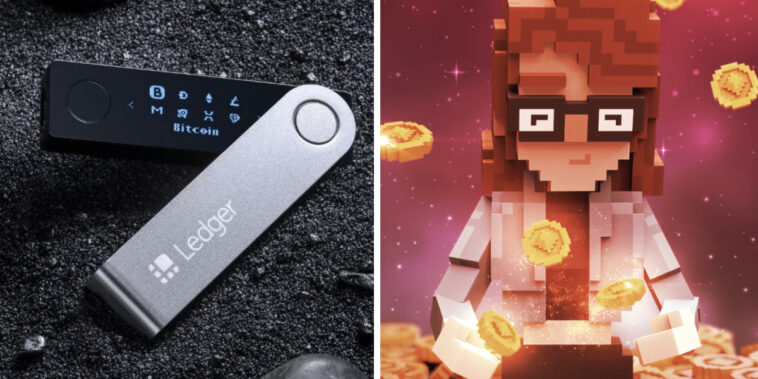 The crypto wallet manufacturer Ledger recently bought 36 LAND parcels in The Sandbox metaverse. In addition to promoting its brand, Ledger wants to use its new virtual land to spread awareness on safely storing digital assets like NFTs and Bitcoin.

Ledger’s chief experience officer Ian Rogers announced his company’s metaverse purchase on April 5th at Lisbon’s Non-Fungible Conference. Although there are no details on what Ledger is building in its metaverse property, Rogers says there will be play-to-earn game opportunities.

Each of Ledger’s upcoming games will inform players about various aspects of the crypto industry. Since Ledger is focused on crypto self-custody, most reporters believe Ledger’s new games will explain how to use cold storage.

Rogers says Ledger’s education hub will provide users with a “low risk” way to learn about the responsibilities of storing crypto. He also believes Ledger’s metaverse games will increase demand for the Paris-based company’s devices.

In addition to trading NFTs with the Nano S Plus, this new device can keep NFTs extra secure with offline storage. Ledger says the Nano S Plus has 1.5 megabytes of storage capacity and integrates with 100 apps.

The Sandbox Attracts Big Partners Within and Outside of Crypto

Since crypto companies are already early adopters of blockchain tech, it makes sense that they’re also a large presence in the metaverse. Over the past few years, many crypto-related businesses like Ledger have snapped up land in games like The Sandbox.

For instance, the major crypto exchanges Gemini and Binance have huge Sandbox LAND parcels. The Binance-owned website CoinMarketCap also has a significant amount of LAND in The Sandbox metaverse. These companies claim they will use their in-game land to develop novel experiences for visitors.

But it’s not just crypto companies that are gobbling up LAND in The Sandbox. As Rarity Sniper recently reported, celebrities like Snoop Dogg and Paris Hilton are working on their respective Sandbox projects. In fact, Snoop Dogg just dropped a music video featuring his “Snoopverse” area of The Sandbox.

Even non-crypto businesses have begun staking their territory in metaverse games. For instance, the investment bank HSBC is now building an e-sports stadium in The Sandbox. Warner Music Group is using its Sandbox LAND to create an amusement park and a concert hall for virtual live events.

With all of these prominent partnerships, it’s clear there’s no shortage of interest in The Sandbox’s expanding ecosystem.