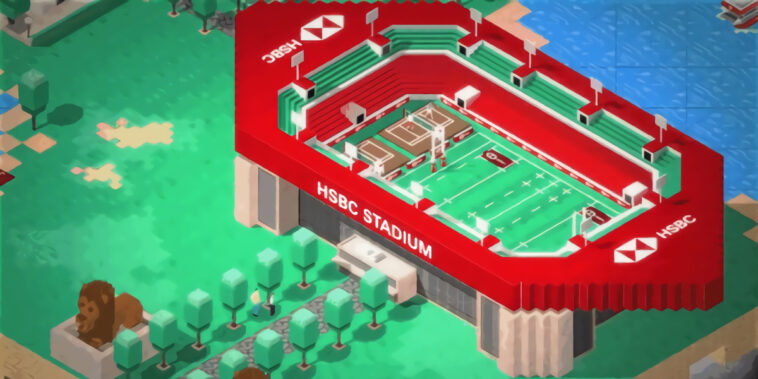 HSBC, a financial institution with almost $3 trillion in assets, has become the first global bank to enter The Sandbox metaverse.

The bank plans to buy a plot of land in the popular decentralized metaverse and according to a statement released on Wednesday, use the digital land to engage with sports, e-sports, and gaming fans. More details about the future development of the virtual plot of land were not given.

The Sandbox is a digital world built on the Ethereum blockchain that allows users to create and monetize pixel-like worlds. Virtual land in The Sandbox has sold for as much as $4.3 million dollars, and a variety of companies, brands, and celebrities have invested in the metaverse.

Decentralized blockchain-based metaverses like The Sandbox and Decentraland enable users to buy, sell, and trade digital goods and services in the form of non-fungible tokens (NFTs) using cryptocurrencies. As NFTs, cryptocurrency, and blockchain technology continue to shape the future of Web3, both platforms have emerged as metaverses to contend with.

Other global brands working with The Sandbox include Adidas, Warner Music Group, Gucci, the Walking Dead, and Snoop Dogg.

HSBC isn’t the first global financial institution to invest in digital land in the metaverse. Last month, JP Morgan Chase paid over $900,000 in Ethereum for a new virtual office in Decentraland.

JP Morgan also reported that they believe the metaverse, a term that’s used loosely to describe worlds built for virtual and augmented reality, could become a $1 trillion annual market.

Also in the financial sector, the New York Stock Exchange filed trademarks related to NFT technology and the metaverse earlier in the year, and there’s speculation it aims to open its own NFT marketplace.

The metaverse is being sold as a virtual world where we can shop, eat, game, have adventures, and pretty much do anything we can do in real life. Judging from the investments by these institutions, it looks like we might be doing our banking in the metaverse as well.

According to the chief marketing officer at HSBC Asia-Pacific, Suresh Balaki, partnering with The Sandbox will help build the bank build “innovative brand experiences for new and existing customers.”

Although HSBC has been critical of cryptocurrency in the past, once saying it was “not into bitcoin,” the move to invest in a blockchain-based metaverse like The Sandbox suggests the wind may be shifting.