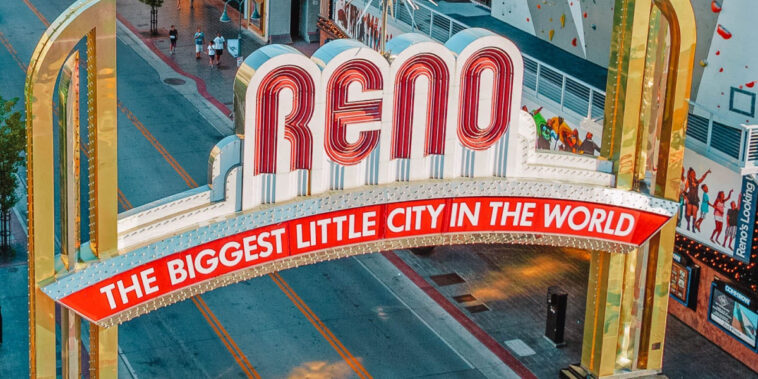 Officials in Reno, Nevada, recently said they’re working on a Web3 data storage platform called the “Biggest Little Blockchain.” Reno’s leaders say this is the first time a US city has launched a public blockchain-based network.

This summer, Reno will focus on uploading important documents from its Register of Historic Places. The local government will monitor its first blockchain experiment for a few months before deciding whether to add more features.

Reno decided to test its “Biggest Little Blockchain” on BlockApps’ STRATO platform. The city also made it clear that its new blockchain program wouldn’t put a strain on the environment.

Reno’s Mayor Hillary Schieve talked about the “Biggest Little Blockchain” at the most recent US Conference of Mayors. Schieve urged thousands of attendees to investigate Web3 technologies like blockchain, crypto, and NFTs.

Speaking of NFTs, Mayor Schieve mentioned her city was developing art NFTs that might “unlock certain experiences.” She also suggested she wants to use NFTs to offer visitors more unique ways to tour Reno’s many attractions.

Reno residents may not be surprised to hear about their city’s recent push to integrate blockchain technology. In the past few years, Mayor Hillary Schieve has been vocal about her involvement in the crypto industry on social media. Indeed, Schieve has become a well-known investor and supporter of various altcoins, especially Chainlink.

In addition to personally investing in crypto projects, Mayor Schieve attempted to create an NFT version of “The Space Whale” statue outside Reno’s City Hall. She was also instrumental in organizing the “Reno DAO” on the Tezos blockchain.

It’s obvious that Reno isn’t afraid to explore blockchain technology, but the same could be said about many other American cities. Most notably, Miami has become a major crypto hub in the past few years. In fact, Miami released a cryptocurrency called “MiamiCoin,” and Mayor Francis Suarez now takes his paycheck in Bitcoin.

Interestingly, leaders in Cool Valley, Missouri, recently airdropped $1,000 worth of Bitcoin to their residents. This initiative aimed to teach locals how to use crypto wallets and encourage people to hold Bitcoin as a long-term investment.

Lawmakers in states like California and Arizona have also openly discussed making cryptocurrencies like Bitcoin legal tender. Texas has also become a haven for many blockchain and Bitcoin mining companies.

In fact, Texas’s Fort Worth recently became the first US city to sponsor a Bitcoin mining operation. There are now mining rigs inside Fort Worth’s City Hall contributing to the Bitcoin network.