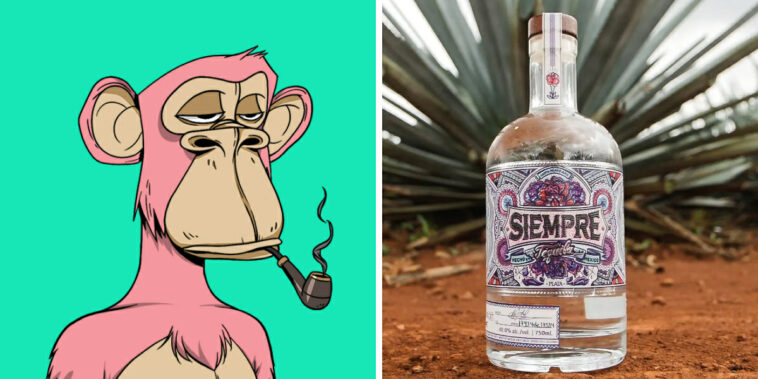 Siempre Tequila has already begun building a backstory for its pink-fur Bored Ape. Chido recently tweeted that he’s just a “small-town ape from Mexico,” and he still can’t believe he’s causing such a fuss on websites like HYPEBEAST.

Although Siempre Tequila has a strict “No Celebrities Allowed” policy, it felt Chido was an exception to its rule. Siempre Tequila believes the BAYC’s “grassroots” origin compliments its brand history. Siempre’s co-founder Alex Lacroix also said he sees many “parallels” between Chido’s expression and the “traits that Siempre embodies.”

Speaking of traits, Bored Ape #5132 only has four traits, which occurs in 2.54 percent of the BAYC. Chido’s rarest trait is his smoking pipe. Only 132 Bored Apes have one of these pipes dangling from their lips. Overall, Rarity Sniper gives Chido a high Rarity Ranking of 401 out of the 10K BAYC collection.

People already in the BAYC may soon get some Siempre swag courtesy of Chido. According to an “interview” with The Bored Ape Gazette, Chido hinted that Siempre is working on virtual and IRL drops. It’s also possible Chido may reveal a few BAYC-themed cocktail recipes and appear in TV ads.

Many companies like Siempre Tequila have begun taking advantage of the BAYC’s popularity by using these NFTs in ad campaigns and logos. Whether companies lease the rights to a Bored Ape or buy them outright, it’s becoming more common to see Bored Apes attached to businesses.

Most notably, Universal Music recently bought Bored Ape #5537 to serve as the face of its NFT group KINGSHIP. Just like “Chido,” Universal re-named its Bored Ape (“Noët All”) and gave her an official “job” as KINGSHIP’s manager.

While there’s no telling where the Bored Apes will appear next, we’ll likely see more of them sponsoring brands in the upcoming years.