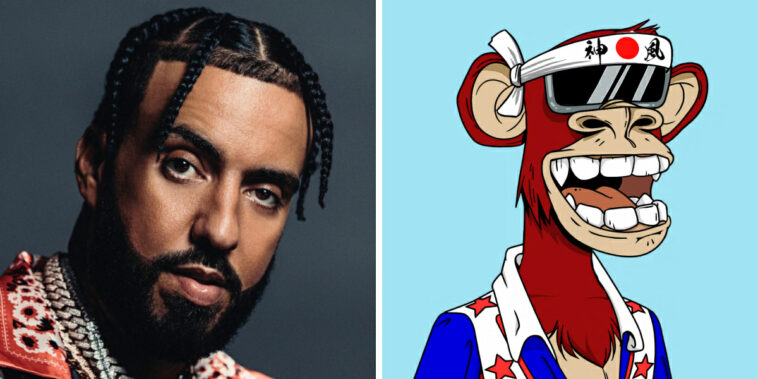 Rappers continue to flock to the Bored Ape Yacht Club. The latest to join the NFT space’s top project is French Montana, who purchased BAYC #5489 for 99 ETH. The New York City-based rapper celebrated his purchase with a Tweet: “I finally aped in with the happy one.”

French Montana joins a bevy of rappers and musicians who call the Yacht Club their Web3 home. The list of rappers includes big names like Eminem, Snoop Dogg, Meek Mill, and Lil Baby. Some other musicians who own BAYCs are Madonna, Justin Bieber, The Chainsmokers, and DJ Steve Aoki.

Although Montana is new to the Yacht Club, the wallet that holds #5489 has been busy. Inside it are six other NFTs, including three from blue-chip NFT collections: a Moonbird, Azuki, and Bean. The other three NFTs are a China Chic, WomenUnite, and a Super Fat Ape from the Super Big Apes Club collection.

He purchased his BAYC at the opportune time as well. It coincided with a downturn in the market, which saw many NFTs on sale for premium prices.

Yuga Labs Has Exceeded Expectations in 2022

To understand Montana’s purchase, you first need to look at the creators of BAYC — Yuga Labs. The organization, which started as a group of four, has been busy in 2022, creating value for BAYC holders.

That value started with the airdrop of the ApeCoin. This fungible token airdrop, which utilized all BAYC collections and sister NFT sets, netted BAYC holders tens of thousands of dollars. Although many “experts” criticized the token, it quickly gained stature, once surpassing all metaverse coins in market cap.

Then came the Otherland airdrop. While the general public duked it out in a heavily lampooned gas war, BAYC holders were able to mint their metaverse land for free at a time of their choosing. Some parcels came with a “Koda,” which some speculate will be Yuga Labs’ next major NFT project.

While it is true that the BAYC acts as an exclusive club, having the best team in the NFT business doesn’t hurt. Time will tell how French Montana’s Ape investment turns out. But if the floor of BAYC holding up during a bear market is any indication, Montana may diamond hand this happy one.