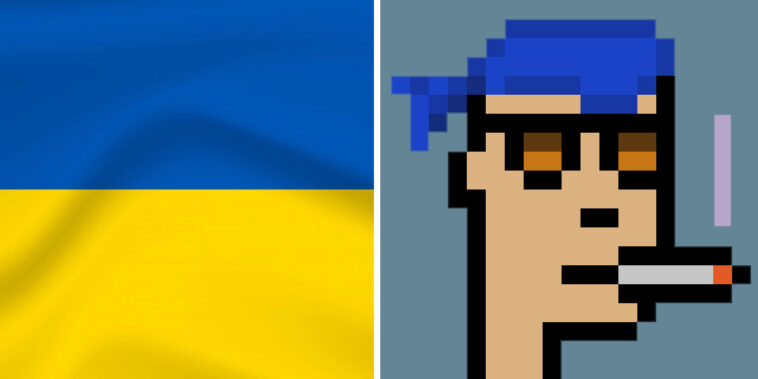 We also don’t know who sent CryptoPunk #5364 to Ukraine. However, data on OpenSea and Etherscan suggests this donor has many valuable NFTs in their portfolio. In addition to extra CryptoPunks, whoever donated CryptoPunk #5364 has a wide assortment of World of Women NFTs.

There’s no word on what the Ukrainian government plans to do with CryptoPunk #5364. However, it’s clear that crypto donations are playing a critical role in helping Ukraine during the ongoing Russian invasion.

On February 26th, Ukraine listed official wallet addresses for Bitcoin, Ethereum, and ERC-20 donations. Since then, Ukrainian charities and government organizations have received at least $54 million in crypto. Most of these funds are going towards Ukraine’s military operations and civilian aid.

While CryptoPunk #5364 may be the first blue-chip NFT donated to Ukraine, it’s not the first time NFTs helped raise funds for the European nation. As Forkast reported, the official Ukraine DAO auctioned a Ukrainian flag NFT on the platform PartyBid. In total, the Ukraine DAO received 2,173 ETH (or $6.5 million) from a group of bidders. Fractions of the Ukraine flag NFT were given to everyone who pooled their crypto in this auction.

Since CryptoPunks is one of the oldest and most influential NFT collections, it consistently ranks high on trading platforms like OpenSea. Also, as Rarity Sniper recently reported, big investors like Chain’s CEO have spent millions on just one Alien CryptoPunk. A recent auction at Southeby’s also sold over 100 CryptoPunks for $30 million.

Of CryptoPunk #5364’s three attributes, his blue bandana is somewhat rare at 4.81 percent. However, CryptoPunk #5364 is male and has a total of three features, both of which are common in the CryptoPunk collection.