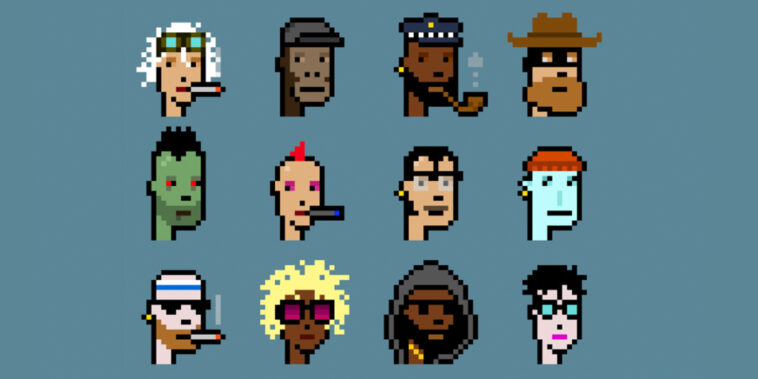 In 2017, two software developers in New York with an interest in cryptocurrencies and non-fungible tokens (NFTs) created a digital art project called CryptoPunks.

The question they wanted to answer when they put CryptoPunks onto the blockchain and gave them away for free was, “Can a couple of lines of code translate into a meaningful feeling of ownership?” And if it could, then could digital art “minted” on the blockchain have value?

A short four years later, the answers to those questions are an astounding yes and yes. CryptoPunks, a collection of 10,000 pixelated digital images of punk-like characters that live on the Ethereum blockchain, is the pioneer of the CryptoArt Movement, and the collection has become a cultural symbol and generated hundreds of millions of dollars in revenue.

It even appears like Larva Labs, the studio behind the project, has positioned itself to be a major player in NFTs and a variety of entertainment spaces for years to come.

So, what exactly are CryptoPunks? How did they become so popular? And how can you get involved in the project? These are just a few of the questions we’ll be covering in this blog.  Whether you’re new to the NFT world or an old head who wants to touch up on NFT history, CryptoPunks is an essential collection to understand.

The History of CryptoPunks

What is now regarded as the catalyst behind the CryptoArt Movement was nothing more than an experiment at first. In 2017, Matt Hall and John Watkinson, the founders of the New York-based software company Larva Labs (founded in 2005), created a software program that would generate thousands of different pixelated avatars.

They wanted to investigate what ownership meant in the digital age and how NFTs and blockchain technology could be used to tokenize digital art.

In June of 2017, Larva Labs released CryptoPunks and gave them away for free. That meant anyone with a cryptocurrency wallet and Ethereum could “mint” a CryptoPunk for the price of “gas fees,” which at the time was equivalent to about $.11 cents.

By minting a CryptoPunk, an automated digital image of one of the 10,000 Punk avatars would be created, and whoever initiated the process became the sole owner of a CryptoPunk.

Because the Punks were minted on the blockchain, ownership and authenticity could be verified, and the Punks could not be forged, stolen, or destroyed. Although it was still unclear what the avatars would be used for, they could be bought, sold, and traded on NFT marketplaces such as OpenSea.

Drawing inspiration from the London punk rock scene, which the two-man team felt had similarities to Bitcoin and cryptocurrency both in its rebellious nature and decentralized and DIY attitude, Hall and Watkinson created an assortment of 24-24 pixel heads of Punk-like characters that exist as non-fungible tokens on the Ethereum blockchain.

No two are the same, and there are a variety of types, traits, and attributes that appear throughout the collection, some rarer than others.

At first, the creators described CryptoPunks as a “small, weird but cool experiment in digital ownership on the blockchain,” and in the first year that was true.

People who sold their CryptoPunks in 2017, reportedly made between $1-$30, and for the first three years after the release only $866K of sales volume was reported. But in the fourth year, the Punks exploded in value and popularity and did over $360 million in sales volume.

On May 10, 2021, a bundle of nine CryptoPunks sold for $16.9 million, and a short time later a single Punk-Alien was sold at Sotheby’s for $11.7 million. The news of these auctions sales made ripples throughout the art world and led to press coverage in Bloomberg, CNBC, The Paris Review, Salon, and The New York Times.

Today, a myriad of celebrities, athletes, and investors have bought CryptoPunks, and some use them as their profile pictures on social media, only increasing the CryptoPunks’ value and exposure. Countless NFT projects have followed in the footsteps of CryptoPunks, but few have had the same success, and none other than CryptoPunks can claim to be the OG of CryptoArt.

The collection even inspired the ERC-721 Ethereum token, which is now the standard token for NFTs on the Ethereum blockchain.

In 2017 when CryptoPunks was released, putting digital art on the blockchain was still relatively new, and the Punks were the first to combine generative digital art, a limited collection, and rarity expressed through traits and attributes.

In one sense, the CryptoPunks collection can be thought of like 10,000 unique trading cards, where some are more valuable than others. Except unlike trading cards that can be damaged, forged, destroyed, or tough to verify, CryptoPunks’ existence as a token on the blockchain guarantees ownership, authenticity, and security.

While for many that may not seem like a big deal, Larva Labs recognized the utility of turning generative digital art into NFTs early on and paved a new road ahead.

The CryptoPunks NFT collection consists of 10,000 24-24 pixel heads of collectible digital art that were algorithmically generated at “mint.” The majority of the Punk avatar profile pictures are humans; 3,840 Females and 6,039 Males. There are also 88 Zombies, 24 Apes, and nine Aliens — making Aliens the rarest Punk type.

Some other attributes include Punks with headbands (406) and Punks smoking a cigarette (961). To better understand the rarity of the CryptoPunk collection, there are a few reputable sites that evaluate NFT collections based on their rarity.

The Success and Top Sales of CryptoPunks

The success of CryptoPunks since its release in 2017 has been nothing short of spectacular. In fact, of the top ten bestselling NFTs of all time, five of them are CryptoPunks. The current floor price (the lowest price you can purchase a Punk) is 68 ETH ($273,547 USD).

This type of meteoric rise is not something often seen in the art world, or even in the cryptocurrency and NFT worlds, and considering the collection was given away more or less for free makes it even more exciting.

Listed below are five of the biggest CryptoPunks sales of all time:

These five of the highest-grossing CryptoPunks to date (along with those mentioned earlier in the article), but it wouldn’t be surprising if these records were broken in the months and years to come.

There have also been some incredible sales of bundles of CryptoPunks. A bundle of nine Punks pulled in a price of just under 17 million in May 2021 at Christie’s auction.

The Community and Celebrities with CryptoPunks

There are few NFT collections that have been as influential in the NFT world as CryptoPunks, and many people who bought in early or minted a Punk have had their lives transformed.

Unsurprisingly, Larva Labs and CryptoPunks have big, active followings on Discord and Twitter, and Larva Labs has released additional NFT projects to grow its brand, such as Meebits and Autoglyphs.

There have also been interesting real-world projects created around the collection, like Save Art Space, which created public art exhibitions of CryptoPunks in New York, Miami, and London. No doubt adding to the strength of the community is the growing list of celebrities, athletes, singers, rappers, and major investors that own a CryptoPunk.

Listed below are some of the biggest celebrities who own a CryptoPunk:

Other celebrities and athletes who own CryptoPunks include Serena Williams, Steve Aoki, Jason Derulo, Faze Banks, Hayden Adams, and more. And the number of influential people who own Punks and participate in the CryptoPunk community is only rising.

Other Projects from Larva Labs

The two creative technologists behind Larva Labs have released a number of NFT and blockchain projects since the success of CryptoPunks.

They have also collaborated with major companies such as Microsoft and Google and spoken at prestigious institutions around the world, including MIT Media Lab, Stanford Law School, Harvard Law School, Art Basel Miami, and Christie’s Auction House in London.

Here are two other projects from Larva Labs:

Larva Labs even released Road Trip, an arcade-style driving game app that they describe as “The endless driving game that ends badly.” Considering the momentum of CryptoPunks and some of these other projects, you can’t expect Larva Labs to slow down anytime soon.

How to Get Involved with CryptoPunks

If you’re just finding out about all this now, you may feel like you’re a little late to the party. But that’s okay — a lot of us are. Even though the original 10,000 CryptoPunks NFTs have already been minted, there are still a few ways to get involved.

Listed below are some ways that you can get involved with Larva Labs and CryptoPunks:

Participating in the Discord and Twitter communities is one of the best ways to get involved in any NFT project, including CryptoPunks. And if you do purchase a CryptoPunk on a secondary market, be sure to evaluate its rarity and do proper research before investing.

Since CryptoPunks is the first of its kind, there have been many rip-offs and imitative NFT projects that aren’t worth looking into and definitely not worth throwing hard-earned Ether at. That said, there are also some NFT collections that are similar to CryptoPunks and do have utility and communities worth paying attention to.

To evaluate NFTs projects that are similar, we used the following criteria which resemble the characteristics of CryptoPunks:

Here are a few CyptoPunk-like NFT projects that we think are interesting using the criteria listed above:

Since not everybody has a couple hundred thousand dollars in Ether to invest in digital art collections, these could be some good projects to check out. But before buying an NFT on a secondary marketplace, always do your research and make sure you know what you’re buying.

If you take out your phone and show your grandma a picture of CryptoPunk, it may not look that special. If you tell her it’s worth $250,000, she’ll probably think you’ve lost your marbles.

Of course, someone thought a Jackson Pollack, a Van Gogh, or a Jean Micheal Basquiat was worthless as well. Even the first sketches of Mickey Mouse, Dr. Seuss, and Leonardi de Vinci may not have been thought to be worth much to anyone other than the artists themselves at the time.

But now they’re worth millions and also carry a priceless cultural significance. CryptoPunks, as the Godfather of NFT art, will likely retain value simply based on how much it inspired things to come. But do CryptoPunks have real utility?

Listed below are some of the uses of owning a CryptoPunk NFT:

At this point, the success of CryptoPunks is one of folklore in the NFT and CryptoArt worlds. Furthermore, CryptoPunks has signed with United Talent Agency, which will represent them in appearances in film, television, video games, and publishing.

The more Larva Labs expands into various entertainment spaces, the more likely the original CyrptoPunks will be even more sought after.

How to Evaluate a CryptoPunk

If you’re considering purchasing a CryptoPunk or other NFT from Larva Labs, you should always do sufficient research before making a decision. One of the best ways to learn more about CryptoPunks is by looking at the rarity of the Punks before visiting secondary markets.

This can give you an understanding of which Punks and traits are rarer than others and therefore more valuable.

CryptoPunks can also still be bought and sold on secondary marketplaces, although as discussed, the prices are high. So, if you’re going to invest in a Punk, make sure you like the Punk you’re buying.

And when purchasing a CryptoPunk or any NFT, it’s important to only invest money you can afford to lose. NFTs are still a speculative and volatile market, and no one knows exactly what the future holds.