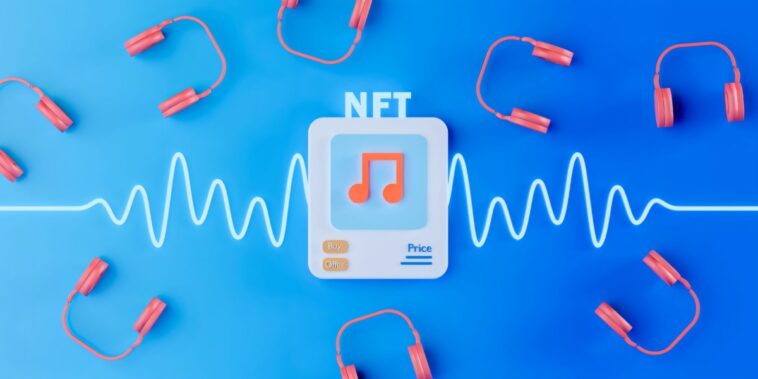 By now, most people know about non-fungible tokens (NFTs). And if you know about NFTs, then you’ve likely heard about NFT artists like Beeple and generative NFT collections like CryptoPunks and Bored Ape Yacht Club selling digital artwork for hundreds of thousands, even millions of dollars in cryptocurrency.

But NFTs aren’t just transforming the world of digital art. As technology evolves, NFTs are beginning to influence a myriad of industries — and few are as exciting as music. If you’ve been wondering what Web3 technology and NFTs are doing in music, you’ve come to the right place.

This article is a short introduction to the world of NFT music – what it is, why it exists, some of the top Web3 music platforms, Web3 musicians, and other exciting things happening in the NFT music space. Let’s get started.

What is a music NFT?

Simply put, a music NFT is a non-fungible token that’s linked to music or some kind of musical experience. It can be a song, album, video, musical “stems,” or even a generative piece of music — meaning a piece of music that was created by an algorithm.

Often a music NFT is a single song accompanied by album artwork, like a CD single. But not always. Sometimes, entire albums are dropped as NFTs or music videos are sold as NFTs — as was the case with Timbaland’s Bored Ape-themed music video “Congo Has a Meaning.”
But why should musicians bother to create an NFT?

But to better understand the benefits of music NFTs, it can be helpful to review non-fungible tokens.

NFTs are unique digital tokens that are “minted” and stored on blockchains — global networks of digital ledgers. NFTs can be linked to physical and digital items. They can be bought, sold, traded, or held.

One key component of an NFT is that it proves ownership over a digital item. And since creators can turn nearly any digital file into an NFT, the new technology is useful for music. In fact, many people in the music industry believe Web3 will bring about a superior business model to the current music-streaming model and transform the future of music.

Artists can also decide the quantity of NFTs they wish to release, and since no NFT is the same, artificial scarcity is created — potentially adding value to the digital asset. Furthermore, when musicians mint NFTs, they don’t give away their Intellectual Property (IP) rights, and with smart contracts they earn money from secondary sales of their music NFTs.

Here are two of the most common types of music NFTs:

Utility-driven music NFTs. NFTs can have several utilities. They can serve as a membership card to a modern-day fan club, grant holders access to exclusive merch, token-gated access to Discord channels, IRL concert tickets, meet-and-greets, metaverse concerts, and future NFT airdrops. Utility-drive NFT are great for musicians who want to reward their fan base and for generating a community over time.

Most music NFTs fall into these two general categories, and some mix elements from both. Another interesting aspect to consider with music NFTs is how they are being released — or rather, how music NFTs are “dropped.”

Music was the most influential industry to ever call the launch of a product a “drop” — and nothing’s changed with NFT music. There are several ways music NFTs are dropped, and since Web3 and NFT technology is constantly evolving and musicians are creative vessels, we expect there will be many more methods in the future.

Here are some different ways of releasing NFT music:

That said, how artists choose to mint music NFTs depends on what they want to get out of the technology. Some musicians have minted each track of a new album as 1:1 NFTs and auctioned them individually.

Musicians are some of the most creative people in the world, but they often get the “short end of stick” when it comes to being compensated for their work. The history of the music industry is one of artists being underpaid and underserved by record labels, managers, agents, piracy sites, streaming services, and middlemen who notoriously take more than their fair share.

Though the rise of streaming platforms like Spotify and Apple Music has been great for fans — giving them access to nearly any song, it has been less generous to artists, especially independent artists. Today, musicians need millions of streams to earn a living through streaming services, as most services pay out less than a penny per stream. The current model, in many ways, has cut out the idea of a “middle-class musician.”

But NFT and blockchain technology are opening doors to a new business model, and now artists can profit off their intellectual property without third-party intermediaries. This is a big deal for the music industry.

And there are other benefits to music NFTs.

The music industry’s current streaming business model rewards big labels and popular artists. But it often comes at the expense of independent creators. Proponents of Web3 music hope that will change. Here are some of the specific ways NFTs can benefit musicians:

NFT music is not a zero-sum game. NFT musicians can drop tracks and albums on streaming platforms and simultaneously release NFT collections. And though NFT music is unlikely to replace record labels or the streaming model altogether, some think it could help rising artists negotiate better deals in the future.

NFT music is exciting for music fans. We all know someone who’s claimed to have discovered a band or artist before they got famous, but very few have the ticket stubs or photos to prove it. Even if they did, what would those be worth?

Now, fans can own NFTs stored on the blockchain by an artist they love or discovered early in their career. And they can trade those NFTs with people from around the world.

Utility-based music NFTs can also connect fans more directly with artists. One innovative NFT music platform, Royal, is letting fans potentially earn money from songs they invest in. On Royal, fans can invest in NFT songs to earn a small percentage of royalties as it streams over time.

Streaming Royalty Rights are an entirely new concept in the music industry— but top artists like Nas are already dropping NFT singles on the innovative platform.

It’s possible to purchase and mint NFTs on major NFT marketplaces like OpenSea, Rarible, Nifty Gateway, and SuperRare. But many musicians are choosing to mint on NFT-music focused sites. Here are are a few Web3 platforms for NFT music:

Most music NFT platforms have been around a couple of years at most, and it will take time to see who comes out on top or how many survive in the space. But major artists and labels are also investing resources in NFT music, and many believe it could prove to be a lucrative revenue stream for artists in the future.

For some of the world’s most famous musicians, it already is.

Steve Aoki, Paris Hilton, Kings of Leon, Timbaland, Jim Jones, Pitbull, 3LAU, Warner, Winamp, Napster, even Spotify — these are just a few of the artists and companies that have been involved with NFT music, the metaverse, and Web3 music.

But before we dive deeper, it’s worth noting that perhaps no other artist has been as active in Web3 music as West Coast rapper, entrepreneur, and generational chameleon Snoop Dogg. Snoop’s transition into Web3 and NFT music has been as smooth and dominant as his flow over a Dr. Dre beat.

Earlier in 2022, he released his album “B.O.D.R” as an NFT on the Gala Music platform, followed by The Sandbox-themed music video “House I Built.” He’s pledged to transform Death Row Records into a NFT music label, has an NFT collection valued in the millions, and is opening a bakery shop off the strength of his Bored Ape Yacht Club NFTs.

But it’s not just the “Doggfather of Rap“ that’s getting down to Web3 music. Listed below are some of the headlines from the top music NFT projects in 2022:

Beside the number of musicians entering Web3 and dropping NFT music, labels like Universal Music and Warner Records are starting to invest time and energy in the space. Both have partnered with Web3 companies to develop NFT and Web3 music and artists.

The NFT community has always been big on creators, and if there’s any group of creators that could benefit from a new business model, it’s musicians. Proponents of music NFTs believe it will help artists connect directly with their fans, earn secondary royalties, and prove digital ownership like never before.

And though most people doubt NFT music will blow away big labels and streaming companies, it could give artists more leverage on their way up, or at least another tool in their toolkit for releasing music. Furthermore, if the metaverse evolves into the massive virtual world and ecosystem many are predicting — it will need music.

For now, NFT music remains young. Its pioneers and trailblazers are still arriving to the game — which we think is part of the excitement. But Web3 musicians and NFT music creators are hopeful for the future of the music industry — and so are we.