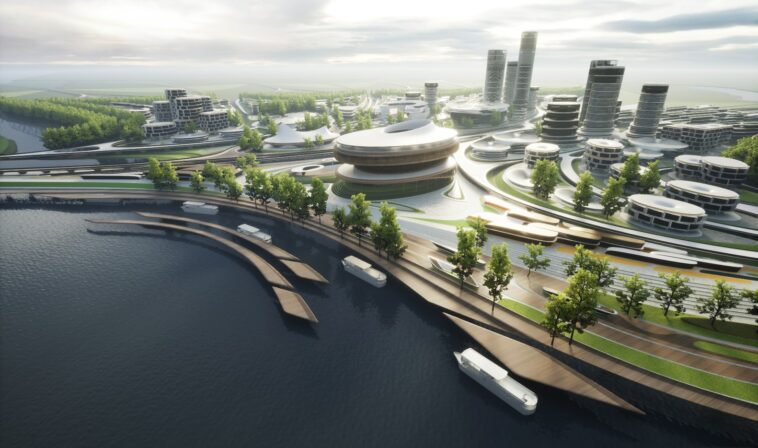 Architectural design has come to the metaverse. In an announcement, U.K. architecture firm Zaha Hadid revealed that it had created an entire city called Liberland within the Metaverse, a cloud-based platform where users can explore 3D environments with avatars.

The buildings take after Zaha Hadid’s design approach (curvaceous building structures with rounded corners), while some have elements impossible in real life due to the laws of gravity. Liberland is modeled after a micronation called the Free Republic of Liberland, which is part of disputed land between Croatia and Serbia.

Zaha Hadid principal Patrik Schumacher said the goal for the metaverse Liberland is to become a “go-to” site for networking and collaboration within Web3.

The buildings include a city hall, plaza, and exhibition center. The city hall would not be complete without a reference to the real-life Liberland and, as such, contains a flag of the micronation hanging on the wall.

Schumacher also noted that a goal of the project is to sell virtual land within the Liberland metaverse. That land will correspond to physical land available in the micronation.

Liberland Compared to Other Metaverses

If “NFT” was the top term in 2021, it appears “metaverse” may be heading for that crown this year. Sparked by Facebook’s name change to “Meta” in the fall of 2021, interest in the metaverse has not waned in 2022 — especially among top companies.

With the ability to build experiences on top of metaverse land, companies like Gucci and Miller Lite have jumped in, buying land with plans to transform them into experiences for users. Recently, Sketchers leased a plot of land in Decentraland’s Fashion District, and it plans to create an “immersive” experience for shoppers.

There’s no telling if Zaha Hadid’s Liberland will be as successful as the top metaverses, but it has an interesting angle. Because the plots of metaverse land will correspond to physical land, this relationship could give the virtual land some utility. The land in other metaverses lacks ties to physical land.

And while most companies are buying metaverse land for a consumer-facing approach, a Liberland commercial district where crypto heads could meet might also be interesting.

Still, Zaha Hadid and the people behind Liberland have their work cut out for them. While the demand for all things metaverse is high, the competition for providing resources is also quite steep. Time will tell if the project, representing a libertarian country in disputed territory in Europe, will succeed.