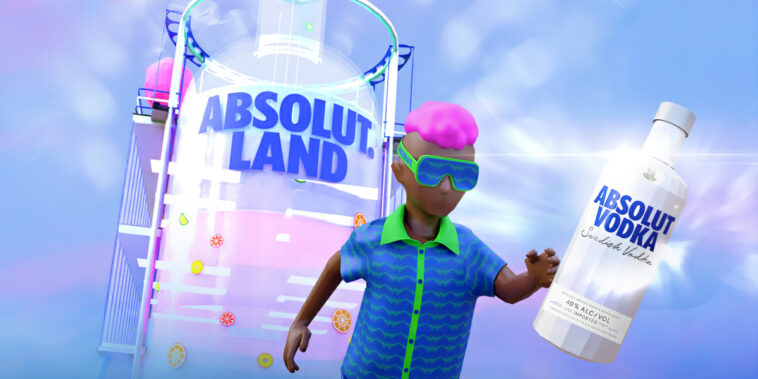 On April 15th, the Swedish vodka brand Absolut opened a metaverse experience called Absolut.Land in Decentraland. Players who explore and interact with Absolut.Land could win various prizes, including wearable NFTs, discounts on Absolut spirits, or a trip to the Coachella Music Festival.

Absolut launched its Decentraland attraction on April 15th to coincide with the first day of 2022’s Coachella Festival. Many of the activities and fashion accessories in Absolut.Land pay homage to Coachella, including a zero-gravity dance hall. Absolut.Land also has a digital version of a physical Absolut museum exhibit in Stockholm.

According to Absolut’s website, anyone could receive stylish fashion NFTs if they take an “avatar selfie” in Absolut.Land’s dedicated “Selfie Room.” Once players have their selfie pic, they must upload it to Twitter with the tags “@Absolutus” and “#AbsolutLand” plus their Ethereum wallet’s public address.

Absolut says there are six wearable NFTs up for grabs, some of which were created by NYC designer Susan Alexandra. Aside from the 300 Absolut puffer jacket NFTs, each of these digital wearables will have 200 editions. A few NFT accessories Decentraland players could win include a button-down shirt, sandals, and an Absolut cap.

Absolut also says it will hide ten unique tokens throughout Absolut.Land. Players who find one of these coins could win free merch or promo codes for Absolut products.

Lastly, the top prize in Absolut.Land is the “Teleporter Token.” Those who find this item could win a trip to next weekend’s Coachella Festival with one guest. If players are interested in this reward, they must enter their contact details on Absolut’s official Absolut.Land page. Absolut will randomly draw a name from those who submitted their info and discovered the Teleporter Token.

News of Absolut’s metaverse push comes soon after Coachella announced its entry into the NFT market. For instance, Rarity Sniper recently discovered that Coachella would give commemorative “Bloom NFTs” to passholders in 2022. A few months earlier, the famed Cali music festival announced an auction for ten lifetime NFT passes on FTX.

According to a recent Forbes report, Absolut Vodka is only beginning its push into the metaverse. Absolut’s CMO Pam Forbus said the company is doubling its media budget, and 80 percent of this money is going to digital ventures.

Note: Absolut.Land is only open to Decentraland players who are over 21.

Absolut isn’t the only alcoholic beverage your in-game avatar could try nowadays. For instance, beer lovers could easily find a few of their favorite brands in popular metaverse games. Case and point: Miller Lite opened its “Meta Lite Bar” in Decentraland before the 2022 Super Bowl. About one month ago, Heineken released a virtual version of its “Heineken Silver” beer in Decentraland.

Budweiser parent Anheuser-Busch has also been aggressive in its Web3-focused campaigns. In the summer of 2021, the Missouri-based company bought a Tom Sachs Rocket Factory NFT for $25,000. Shortly afterward, Budweiser spent $96,000 to own the “beer.eth” domain name.

Whether you like spirits or suds, there’s a good chance you’ll find big-name beverage brands while exploring Web3.