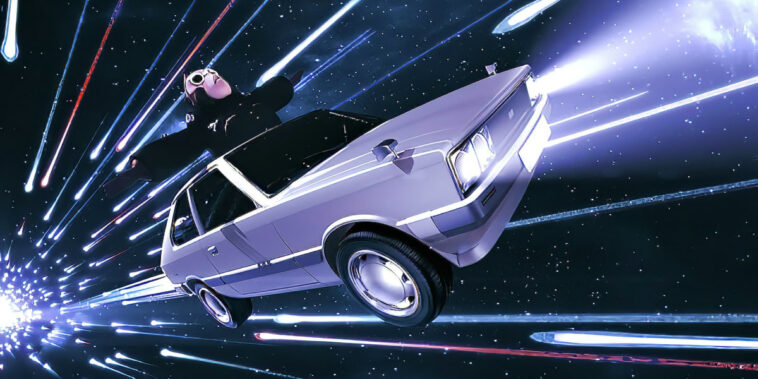 To generate hype for its new NFT community, Hyundai released a 54-second promo called “Hyundai x Meta Kongz.” This short clip shows a Meta Kong hopping into a vintage Hyundai PONY and taking it for a joy ride to the moon. As the Hyundai PONY leaves the earth’s surface, it magically transforms into a modern rendition of Hyundai’s PONY design.

Near the end of Hyundai’s ad, the Meta Kong notices a bit of stardust clinging to the car’s windshield. The trailer closes with the announcement: “Shooting star NFT, dropping soon.”

Although there’s still speculation over when Hyundai’s star NFT will “land,” Hyundai says it will drop 30 Metamobility Meta Kongz NFTs on April 20th. Anyone interested in buying one of these special NFTs should follow Hyundai NFT’s official Discord and Twitter for the latest details.

To stay in touch with its NFT community, Hyundai says it’s working on an official NFT portal. The company expects this site to go live in May.

Hyundai first introduced the word “metamobility” earlier this year at the CES. According to executives, “metamobility” refers to using metaverse technologies (e.g., virtual reality) to help free customers from the restraints of physical reality.

Although many auto companies have begun dabbling with NFTs, Hyundai has become one of the most enthusiastic adopters of Web3 technologies. Before announcing its Meta Kongz-themed NFT community, the South Korean company has been very open to metaverse projects and digital collectibles.

For instance, Rarity Sniper recently reported on a virtual Hyundai Oilbank in the Zepeto metaverse. As the name suggests, this virtual area offered “digital fuel” and electric charging ports to drivers in Zepeto. Visitors could also take a refreshing break in Hyundai Oilbank’s spacious seating area or shop in its virtual stores.

More recently, Hyundai revealed a collection of eco-conscious NFTs for its Kia Motors division. These six highly-stylized NFTs were sold on the Klip Drops platform on March 26th.

Although competition in the metaverse market is heating up, it’s safe to say South Korea will be a top contender.