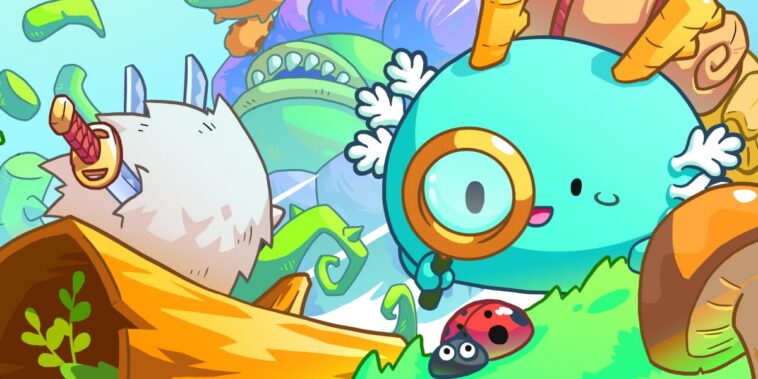 According to a recent report, Axie Infinity, one of the leading players in the NFT-gaming space surpassed $4 billion in all-time sales from non-fungible tokens (NFTs).

Axie Infinity is an NFT-based online video game and marketplace that was launched in 2018 and since become one of the most-used play-to-earn blockchain games to date.

The report by DappRadar showed Axie Infinity had sold $4.14 billion in NFTs to nearly 2 million traders – with an average price of around $200. But despite the modest floor price for Axie NFTs, some NFTs have gone for much higher. Recently, one plot of digital land sold for a mind-boggling $2.3 million.

The game – which is partially owned and operated by its players – was developed by the Vietnamese Sky Mavis studio using the Ethereum-based cryptocurrency AXS and SLP. It has become so popular in the Philippines that some people have left their day jobs to play professionally.

Each Axie character and land parcel are represented as unique digital assets that be traded, bought, and sold on the Axie Infinity marketplace or secondary marketplaces like OpenSea. Players can also stake their AXS tokens to earn more coins and take on a governance role in the community treasury.

Axie Infinity is now the third leading NFT marketplace, behind OpenSea and LooksRare.

The Future of Gaming Shifts to the Metaverse

As blockchain technology and NFTs reshape the possibilities of gaming, perhaps no other company has been as fundamental in pioneering play-to-earn gaming as Axie Infinity.

Players of Axie and other NFT-based video games have a chance to earn cryptocurrencies through their gaming activity and those cryptocurrencies can be exchanged for fiat money. While that might sound trivial, play-to-earn gaming is reshaping the gaming worlds and the lives of some of the players involved in them.

Although gamers have been vocal in their criticisms of NFT-based games, this hasn’t stopped major gaming developers from getting involved.

Nintendo, Konami, Atari, and Krafton are just a few of the traditional gaming companies that have been investing in NFTs and the metaverse. They’ve likely followed the success of Axie Infinity – which currently boasts 2.8 million users – from the early days and realize the potential of play-to-earn games.

Although the price of AXS has fallen in recent weeks along with most cryptocurrencies, the steady stream of Axie NFT sales proves players and collectors alike find utility in Axie Infinity’s gaming metaverse.

Surpassing $4 billion in sales also suggests the pioneering gaming company could be well-positioned in the NFT space for years to come.