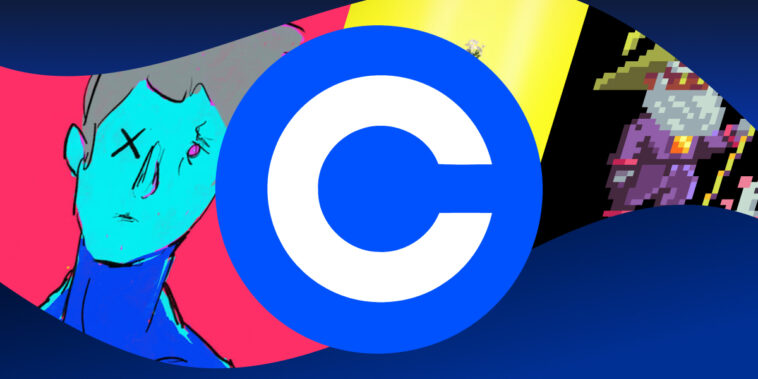 In its report on Coinbase, Needham suggested two scenarios to come up with its NFT revenue estimates. For the “low-end” $450 million figure, the firm guessed Coinbase will charge fees of 2.5 percent and have a total trading volume of $1.5 billion. To hit the $1.26 billion mark, Coinbase would need to have a 3 percent fee and reach $3.5 billion in yearly NFT trading volume.

In either scenario, Needham said it was optimistic about Coinbase’s stock price (ticker: COIN). Currently, analysts at Needham have a “buy” rating on COIN, and they believe it will reach $360 per share. As of today, COIN shares are trading at around $184.

According to Coinbase’s most recent earnings call, the American crypto exchange brought in $7.4 billion in revenue in 2021. The San Francisco-based company also had a net income of $3.6 billion last year.

Although Coinbase announced an NFT market in the fall of 2021, it hasn’t set an official release date. On Coinbase NFT’s Twitter page, the company teased an upcoming launch, but it only said it would open its store “soon.” In this March 14th tweet, Coinbase NFT also claimed it’s working with “100+ creators.”

Can Coinbase NFT compete with OpenSea?

NFT enthusiasts have no shortage of marketplaces to purchase digital collectibles. However, the bulk of NFT sales happen on Ethereum, and most of this trading is on just one site: OpenSea.

Thanks to blue-chip projects like the Bored Ape Yacht Club, OpenSea enjoys the highest trading volume for any NFT platform. A recent Forbes report found that OpenSea sometimes handles over $3.3 billion in NFT trading in one month. Currently, many analysts believe OpenSea has a valuation of $13.3 billion.

Although competition will be fierce, a few financial experts believe Coinbase is in a good position to steal some of OpenSea’s market share. For instance, Seeking Alpha contributor Phillip Braun said Coinbase already has a larger pool of potential NFT buyers. According to Braun’s findings, there are now 3.6 million people on Coinbase NFT’s waitlist. It wasn’t until January of 2022 that OpenSea surpassed 1 million active wallets.

Coinbase also partnered with MasterCard to make its NFT market more accessible to customers. The Coinbase NFT Twitter page has almost 405,000 followers, and there are at least 89 million accounts on Coinbase’s primary exchange.

While it will be difficult to overtake OpenSea, Coinbase NFT has the potential to influence the global NFT market.