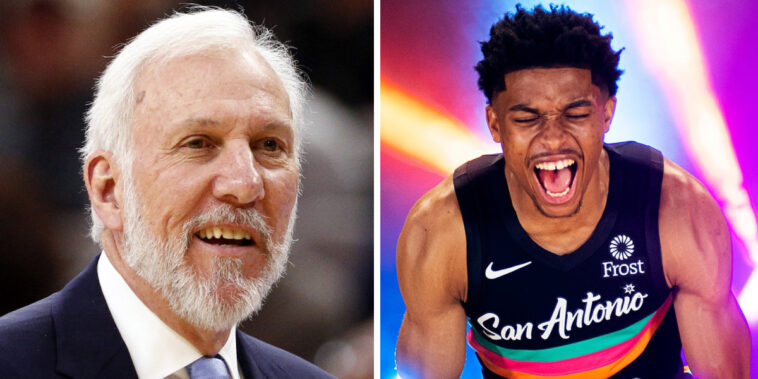 There will be 1,336 NFTs in the “Coach Pop Collection,” which signifies Popovich’s historic winning streak. Of these 1,336 NFTs, ​​1,331 will list on OpenSea for $250 per piece. Each of these NFTs could have one of five Spurs court designs in the backdrop and an original coach Pop play card with Greg Popovich’s signature.

According to the NBA’s official site, the five plays featured in these NFTs include:

The five possible logos in the Coach Pop NFT Collection were on San Antonio’s AT&T Center during Popovich’s career. These designs include the original Spurs Fiesta logo, the throwback Spurs wordmark, and the Spurs icon logo.

Interestingly, the NBA will use Popovich’s win percentage to add an element of surprise to these NFTs. The court logo and play card combination that NFT collectors get post-mint will be determined using “Pop’s percentage.”

The five remaining NFTs in the Coach Pop Collection will also have a play card and court design, but they will be tailored to Popovich’s championship wins. These unique NFTs will grant holders a physical Greg Popovich play card and four courtside seats to a Spurs game next year. Unlike the other 1,331 NFTs, these five exclusive NFTs will go up for auction.

According to ESPN, Popovich was reluctant to sell NFTs after beating Don Nelson’s record. Coach Pop only agreed to release this collection after he learned the NFT sales would go to the San Antonio Food Bank.

NBA Stars Are is All-In on NFTs

Many NBA stars have also launched their own NFT collections on competing blockchains. As Rarity Sniper recently revealed, Michael Jordan put out his “6 Rings” NFTs on Solana. Metta World Peace also announced he would bring his NFT sneakers onto the Solana blockchain.

Plus, LA Lakers star LeBron James is now the official face of the Crypto.com exchange. A few days ago, Crypto.com dropped an exclusive LeBron James NFT collection, and there are rumors “King James” is getting ready to enter the metaverse.