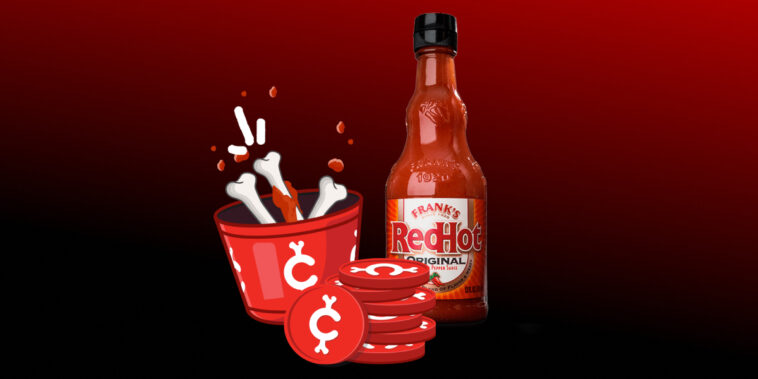 Frank’s RedHot, a company that produces hot sauce, is releasing the first-ever “edible” non-fungible token (NFT) and a spoof cryptocurrency called Bonecoin. The company tweeted about the new eNFT on Thursday:

You’re already eating buffalo wings. Now you could get an edible NFT for doing just that. Got questions? Go to https://t.co/53qKEpp81c pic.twitter.com/Kd6BwAx0jW

The eNFT comes as part of a contest: from January 27th to February 13th, customers can scan images of their chicken wing bones to receive Bonecoin, and the winner with the most bones can receive a singular Frank’s RedHot NFT and a corresponding edible.

The contest runs along the build-up and gameplay of Super Bowl LVI, finishing when the game is over. There’s no saying what the NFT and eNFT will be, though the language in the press release and on Frank’s website embodies the playful joking of the Frank’s RedHot brand — acknowledging the movement behind NFTs and crypto while poking fun at it.

As the promotional material on the website reads, “But how do you make an NFT edible? How about you stop asking questions and start eating!”

The contest will gain two assists — one from Frank’s RedHot ambassador Eli Manning and another from actor and comedian Eric Andre. Manning will be in New York City on February 2nd, handing out wings in the Frank’s RedHot “Wing Wagon” to stir up some publicity and help customers earn some Bonecoin. Andre will handle the promotion on social media.

Frank’s RedHot is the latest company to jump into the NFT movement, following on the heels of Adidas, Nike, Pepsi, Coca-Cola, Time, and many more. Just yesterday, news broke that Atari — the famous gaming company — is set to release their NFT collection, which will consist of loot boxes with unknown contents.

Corporations “jumping in” signals a broader acceptance of NFTs within society and a recognition that they can make money. While some have made the transition to NFT subculture smoothly, others have bungled the attempt, trying to appear “hip” and “cool” even though they have already been in business for decades.

It also marks a period when NFTs (and specific NFT collections) are entering popular culture. One such collection is the Bored Ape Yacht Club, which has seen several celebrity purchases, including Meek Mill, Kevin Hart, Paris Hilton, and Neymar.

Recently, Paris Hilton and Jimmy Fallon compared their Apes on prime time television, with Hilton giving away NFTs from her collection to audience members.

It remains to be seen how the Frank’s RedHot NFT and eNFT will be received, but one thing is for sure: It adds a little spice to this year’s football finale.