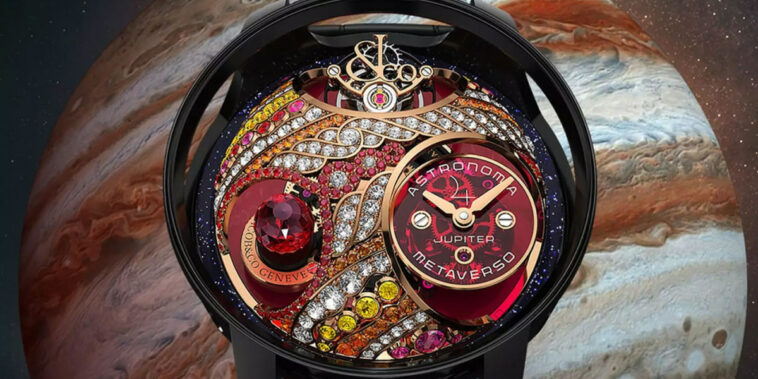 Jacobs & Co., a luxury watchmaker based in New York City, will bring some astronomical flair to its latest NFT drop. Titled “Astronomia Metaverso,” the NFT collection will feature eight NFTs corresponding to the planets in the solar system, and each comes with some form of IRL utility.

Auction winners of the first five planets — Mercury, Venus, Earth, Mars, and Jupiter — will receive a watch matching the planet. The winners of the auctions for Saturn, Uranus, and Neptune will get signed sketches related to their planet NFT. If they so choose, all winners will also receive exclusive perks, including access to invite-only events and special drops.

Each watch comes with unique and detailed designs, including gemstones that match the planet’s colors. The Jacobs & Co. team took special care to add intricate details, like the Mars Rover on top of the Dome on Mars.

Benjamin Arabov, the Jacob & Co. CEO, said that this planetary NFT watch launch is the first of many. He added that the company is always blazing its own path rather than following the crowd. It is putting “all its energy into this NFT launch” and subsequent drops.

NFT marketplace UNXD is handling the NFT launch. Auctions will be the mechanism for the sales of the NFTs, a recurring choice from Jacobs & Co. In April, the company turned its SF24 Tourbillon watch into an NFT and auctioned it off for $100,000.

Perhaps a surprising adopter of Web3 technologies has been Jacob & Co.’s industry — luxury goods. And while most have settled for producing digital versions of their physical goods, some have attached IRL items to NFTs, similarly to the luxury watchmaker.

This tendency is especially true of luxury liquor companies. For instance, Hennessy recently held an auction for a rare bottle of Cognac, one that came with other IRL perks. Other liquor companies have followed suit.

The attachment of IRL goods to NFTs takes advantage of what Kevin O’Leary has called provenance, or the ability for the blockchain to prove who is the owner of a good easily. In traditional collector’s circles, establishing provenance is often difficult due to the high number of frauds.

Although it is uncertain what the winners of the Jacobs & Co. auctions will do with their NFTs, they might be able to resell them. Because the NFTs are on the blockchain, Jacobs & Co. will be able to easily see ownership history and send the watch or signed sketches to the right person.