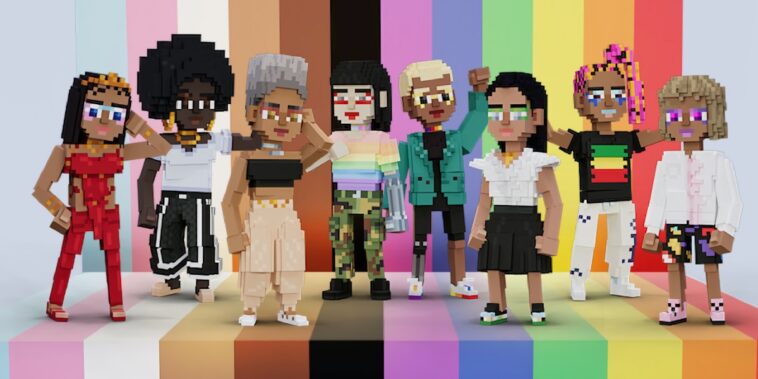 L’Oréal’s makeup brand NYX announced it’s working on an NFT avatar collection in the metaverse game The Sandbox. In honor of Pride Month, NYX’s voxel NFTs will promote diversity and inclusion with a wide range of diverse traits.

According to The Sandbox’s official blog, there will be 8,430 NYX NFT avatars with one of 36 skin colors in the upcoming drop. These in-game NFTs will have many distinct features highlighting dozens of cultural, ethnic, and gender identities.

NYX says it’s working with the Web3 lab People of Crypto (POC) to create its upcoming NFT drop. POC is committed to promoting inclusivity and LGBTQ awareness throughout the crypto industry.

Anyone interested in the NYX Sandbox NFTs can join the company’s “Welcome List” on June 9th. NYX says June 16th is the official drop date for its NFT avatars.

There’s no word on how much an NYX NFT will cost, but NYX promises to donate every dollar it receives to the LA LGBT Center. The cosmetics company also said it expects to raise at least $50,000 from its first NFT project.

If gamers get one of NYX’s NFT avatars, they could use it in The Sandbox’s upcoming “Belonging Week” on June 24th. The Sandbox says this Pride-themed event will create a “safe space” in Web3 where players of diverse backgrounds can connect and celebrate their unique identities.

Besides NYX and the POC Lab, popular Web3 projects like MetaPride Land and the World of Women NFTs will participate in “Belonging Week.” The Sandbox also says Blond:ish will perform at this upcoming metaverse celebration.

Interestingly, this is the second time L’Oréal has used NFT technology to raise awareness of diversity in Web3. As Rarity Sniper recently reported, L’Oréal launched a special NFT set called “Women of Worth” in late 2021. Each of these highly-stylized NFTs featured artwork by female digital artists.

Speaking of female artists, World of Women creator Yam Karkai recently signed a five-year deal with The Sandbox metaverse. As a part of this deal, The Sandbox has pledged to donate $25 million to the World of Women Foundation to increase minority representation in Web3.

And The Sandbox isn’t the only metaverse site that’s placing a major emphasis on diversity and inclusion. The Ethereum-based game Decentraland has hosted multiple diversity-themed events in the past few months.

These initiatives show that Web3 gaming platforms are serious about making the metaverse a safe space.