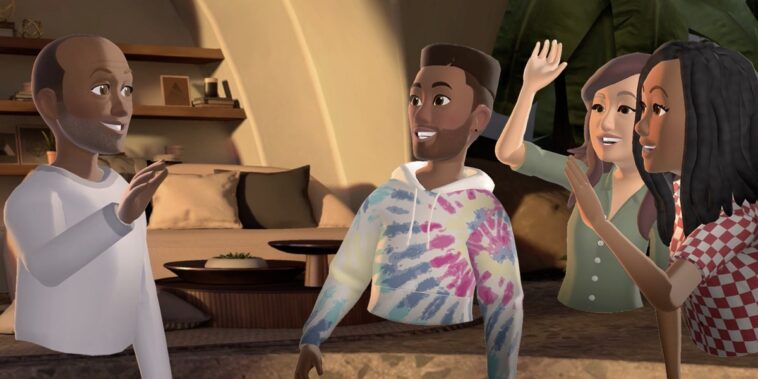 Once the Quest v41 upgrade launches, everyone with a Quest 2 headset will immediately transport to their “Horizon Home” when they turn on their device. According to The Verge, the v41 update could be as soon as next week.

Zuckerberg teamed up with the famous Free Solo rock climber Alex Honnold to help demonstrate Meta’s “Horizon Home” feature. At the start of this clip, viewers could see Zuckerberg and Honnold’s avatars in a mountaintop setting — one of the three “Horizon Homes” that will be available at launch.

After a brief intro, the two watch a 360° video in the metaverse of Honnold scaling Italy’s Dolomites. During this segment, Zuckerberg mentions “Horizon Home” will make it easier for people to meet up in the metaverse to watch immersive videos or play games.

Later in the demo, Zuckerberg highlights the two other home screen options: a traditional Japanese town and a spaceship. Zuckerberg also mentioned that Meta is working on “more options” for users to personalize their home screen.

A few months ago, Meta announced its Horizon Worlds platform had 300,000 users — a 10x increase from the previous year’s numbers.

Since Facebook rebranded as “Meta,” it has continued to distance itself from its legacy social media sites. Indeed, just a few days ago, Meta changed its stock market ticker from “FB” to “META” to symbolize this shift.

Although some investors are wary about the billions Meta keeps investing in Web3, that hasn’t deterred Zuckerberg. Indeed, Meta shows no signs of slowing down in its metaverse endeavors.

Over the past few months, Rarity Sniper has reported on dozens of Web3-related developments in Meta’s social platforms and VR/AR devices. For instance, Instagram recently rolled out an NFT pilot program. Depending on how users respond to this feature, Meta may expand its NFT offerings into WhatsApp and Facebook.

Last year, Meta vowed to create at least 10,000 new jobs in its metaverse division in Europe. The company also poured approximately $10 billion into metaverse research and development in 2021.

Meta isn’t the only company trying to gain a dominant position in the metaverse, but it’s an undeniable force in the industry.