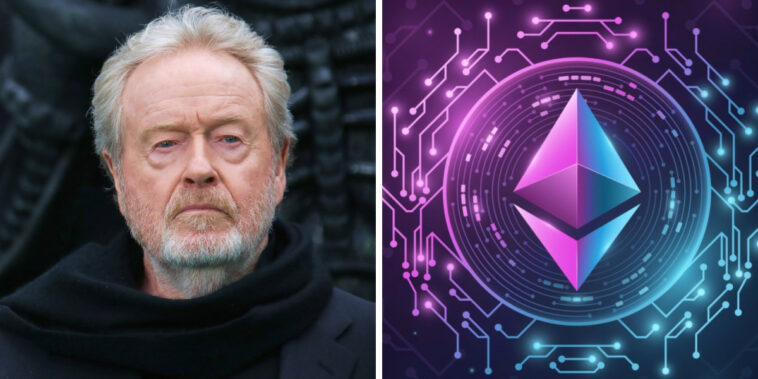 The acclaimed British director Ridley Scott will produce a film on the history of Ethereum. This upcoming motion picture will draw inspiration from journalist Camila Russo’s book, “The Infinite Machine.”

In recent interviews, Camila Russo said she couldn’t “imagine a better team” to bring her account of Ethereum’s backstory to the silver screen. She also predicts that “The Infinite Machine” film will “capture the hearts of our generation.”

Although Ridley Scott is on the production team for this upcoming movie, he won’t serve as the director. According to the latest reports, Shyam Madiraju will direct and write the screenplay for “The Infinite Machine” film. A few previous movies Madiraju was involved with include “Eden” and “Cake.”

Currently, there’s no news on what actors will play major Ethereum developers like Vitalik Buterin in “The Infinite Machine.” Scott Free Productions also didn’t reveal any details on an expected release date.

Crypto & NFTs are Heading to Hollywood

Although Scott’s movie will mark a significant moment in Ethereum’s history, it’s not the first time Ethereum has inspired filmmakers. Interestingly, many NFTs on Ethereum’s blockchain are already Hollywood celebrities.

For instance, actress Reese Witherspoon recently “cast” the World of Women NFTs in an upcoming film. Witherspoon’s production team Hello Sunshine says they want to use the animated avatars in the WoW collection to entertain, educate, and inspire women to explore Web3.

The American exchange Coinbase recently announced that it’s using Ethereum’s popular Bored Ape NFTs in a series of three short films. Called “The Degen Trilogy,” these BAYC films will premiere in June at the NFT.NYC festival.

There are also rumors the Cool Cats NFTs will soon make it into the motion pictures. A few weeks ago, the Cool Cats’ developers signed a deal with one of LA’s most influential talent agencies: the Creative Artists Agency.

However, it’s not just pfp NFTs that are inspiring today’s filmmakers. Some content creators are interested in using Web3 innovations like decentralized governance and smart contracts to alter the art of storytelling.

For instance, actress Mila Kunis announced a new series called “The Gimmicks” that allows NFT holders to vote on upcoming plot developments. People who hold one of the 10,000 “Gimmicks” NFTs could also write fanfiction about their avatar and post it on an official forum. If the head writers like the content they see online, they might include it in a “Gimmicks” episode.

“Clerks” director Kevin Smith also sees great potential in using NFTs to connect with fans and raise funds for upcoming projects. Recently, Smith announced his film “KillRoy Was Here” would be available as 5,555 NFTs on the Secret Network’s Legendao platform. People who purchases a “KillRoy Was Here” NFT could take advantage of bonus footage and artwork.

All of these innovative film projects suggest blockchain technology is already reshaping the entertainment industry.