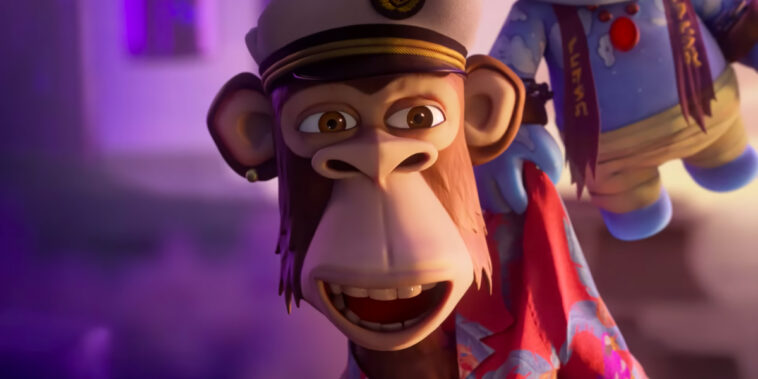 The popular NFT collection Bored Ape Yacht Club (BAYC) is launching its own film trilogy with crypto exchange Coinbase (COIN) behind the camera.

It’s been a huge couple of months for BAYC, the generative profile picture NFT collection that has become the face of non-fungible tokens over the past couple of months. On March 18th, ApeCoin was launched and just a week earlier Yuga Labs — the studio behind BAYC, acquired CryptoPunks — one of the most historic NFT collections of all time.

According to Yuga Labs, the first of the three animated short films, titled “The Degen Trilogy,” will premiere at NFT.NYC in June.

Owners of Bored Ape have been invited to submit their apes along with made-up character descriptions for consideration as characters in the trilogy. The submissions will be reviewed by an actual Hollywood director.

Even more surprising than the films themselves is that Coinbase, a popular crypto wallet, will be producing them. This is a test of Coinbase’s new media arm, led by William Swann, its entertainment and culture marketing director.

After the release of the film, the film will be “wallet-gated” on Coinbase’s website. This means that to view it, users will have to create a Coinbase wallet. Although details are still unclear, the series will also tie into Coinbase’s NFT marketplace, which according to Swann, will be released “very, very soon.”

Universal Music Group (UMG) is also building a band around the Bored Ape NFTs they own, and in California, a BAYC-themed restaurant opened on April 9th. Of course, they accept ApeCoin as one of their forms of payment.

Beyond Yuga Labs, other NFT projects are venturing into film and entertainment. Mila Kunis and her studio Sixth Wall are developing a cartoon series that uses feedback from NFT holders for future plots, and the actress Reese Witherspoon intends to bring NFTs into film through the blue-chip NFT collection World of Women (WoW).

As NFTs continue to reshape what can be done with digital assets, Yuga Labs certainly looks positioned to become a major player in the entertainment space. Although it’s yet to be seen if an NFT collection or studio can deliver a blockbuster movie, we’ll be watching in June to see what kind of entertainment value “The Degen Trilogy” brings to BAYC and NFT fans.