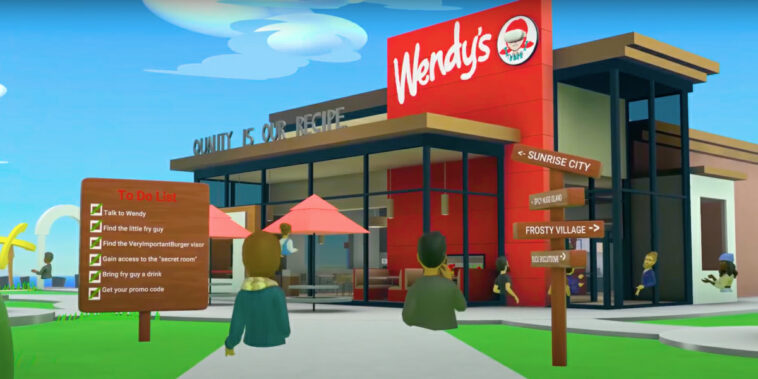 Another food giant has entered the metaverse. Wendy’s announced this week that starting on April 2nd, anyone with a Quest 2 headset will be able to visit its metaverse restaurant in Meta’s Horizon Worlds.

There will also be a giant statue of Wendy’s mascot out front. In an Oculus blog post, the writer mentions that there will be Easter Eggs (special rewards) scattered throughout the restaurant.

In a blog post, Carl Loredo, Wendy’s CMO, said Wendy’s has been trying to meet fans in unconventional and unexpected ways. These ways include its unique approach to “social media, gaming, and engagement.”

People familiar with the “Wendyverse” say this is “Phase 1” and that more creation and outreach may follow in the upcoming months and years. Wendy’s has partnered with Facebook’s parent company Meta to handle the design and deployment of the Wendy metaverse projects.

What will Wendy’s do for customers through its Wendyverse?

Wendy’s metaverse is being dubbed a “burger-fueled VR adventure,” but it remains to be seen how the company will integrate it into its operations. For now, users can make the fry guy “dance,” shoot half-court shots in the Buck BiscuitDome, and use the cannon that shoots T-shirts in the same basketball venue.

One utility Wendy’s may employ is allowing customers to order food directly from its VR restaurant. Then Wendy’s could have the food delivered in person. That would give Wendy’s VR restaurant some added functionality and integrate the virtual world with the physical. McDonald’s has explored that ambition when it registered trademarks for Web3.

Another industry that is proposing a mix of virtual and IRL activities is none other than finance. Different banks have flirted with opening branches in the metaverse, preparing to deliver IRL services in the virtual environment. JP Morgan, which said that the metaverse could be a $1 trillion opportunity, has opened its headquarters in the metaverse Decentraland.

Wendy’s has also chosen to buck the status quo and go with Meta’s Horizon Worlds, which many say will be a closed metaverse. There’s no telling how that will affect the number of people who visit the restaurant and whether the venture will be profitable in the long term.

For now, it’s another big name setting up shop in the metaverse, signs that the momentum behind Web3 is not slowing down.