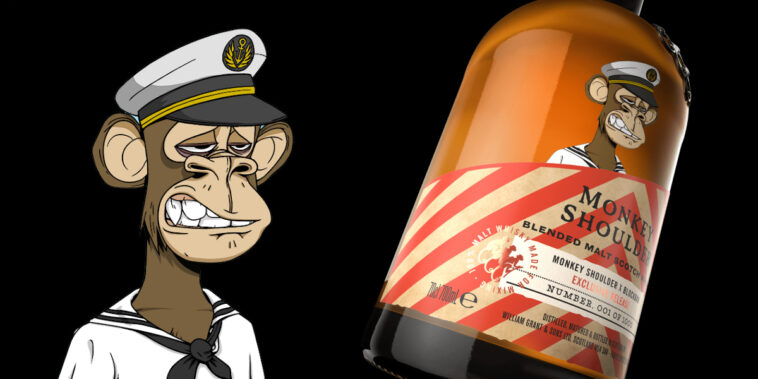 In partnership with the Scotch whiskey brand Monkey Shoulder, BlockBar will give ten BAYC holders the chance to use their ape NFT on a whiskey bottle NFT. BlockBar also says it will give free Monkey Shoulder NFTs featuring Bored Ape #5400 to members of the BAYC.

According to BlockBar’s roadmap, people who already have a Bored Ape could enter for a chance to have their NFT featured on 100 Monkey Shoulder bottles. As long as contestants have their BAYC NFT in their crypto wallet, they can enter BlockBar’s contest portal. BlockBar will close submissions on May 2nd, and the company will reveal the ten winners on May 4th.

In addition to the ongoing BAYC contest, BlockBar says it will drop 1,500 Monkey Shoulder bottles with its sailor-themed Bored Ape #5400. On May 5th, anyone with a Bored Ape could claim one of these exclusive Monkey Shoulder NFTs.

BlockBar will also sell these Monkey Shoulder bottles at a 50 percent discount (or 0.1 ETH) to anyone who already holds a BlockBar NFT. BlockBar says it will release the remaining NFTs for public sale on May 12th.

Anyone who holds one of BlockBar’s Monkey Shoulder NFTs will get access to a private house party this summer. Although BlockBar says this event will take place in Miami, it has yet to reveal more specific details.

Bored Apes are Becoming Big Names in the Beverage Business

Considering the BAYC has a bar in its swampland pad, it’s not too surprising these NFTs have taken off in the alcohol industry. People who enjoy high-quality beer, spirits, or wine may have noticed a few of these 10K apes on new product labels.

In recent interviews, Happy Dad Hard Seltzer’s owner Kyle Forgeard said he’s working on a banana-flavored seltzer that will feature his Bored Ape #8928. There’s even a company called “Bored Ape Wine Co.” that features Bored Apes #1839, #9904, and #3452 on its labels.

These “high-proof” partnerships suggest the Bored Apes have a bright future in the beverage business.