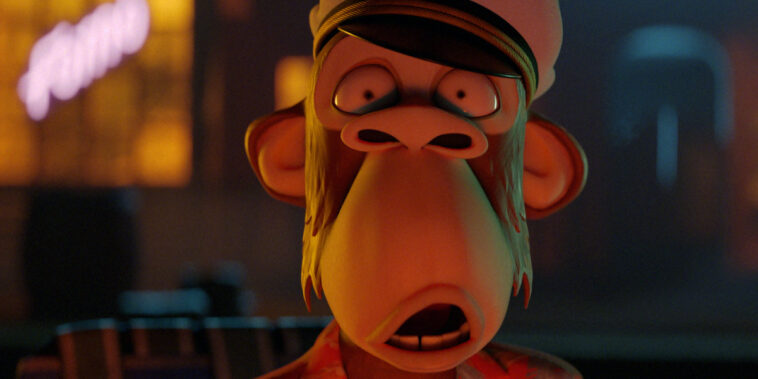 One day after launching ApeCoin, Bored Ape founder Yuga Labs tweeted its first teaser trailer for the “Otherside” metaverse. Above Yuga Labs’ new trailer, the company wrote it will launch “Otherside” in April.

The entire trailer runs for one minute and 30 seconds, and it focuses on one Bored Ape who discovers a mysterious potion while fishing in a swamp. After the central Bored Ape drinks this strange brew, a volcano erupts, and he gets whisked away to the otherworldly “Otherside.”

At the end of this trailer, viewers can see many iconic NFTs traveling in a futuristic submarine/spaceship. A few NFT collections featured in Yuga Labs’ “Otherside” ad include:

There was no in-game footage from the “Otherside” metaverse in this 3D trailer. Also, Yuga Labs didn’t say what it will be like to play in its upcoming metaverse. However, the company wrote that “Otherside” will be “powered by @ApeCoin.”

It’s no secret that the gaming company Animoca Brands is helping Yuga Labs build its upcoming metaverse. In fact, Animoca Brands’ co-founder Yat Siu is a member of the ApeCoin Foundation.

Currently, the Yuga Labs “Otherside” ad has close to one million views and 32,000 likes on Twitter.

The Bored Ape Yacht Club has been anything but “boring” in the past few weeks. As mentioned above, Yuga Labs launched its ApeCoin cryptocurrency on March 17th. Currently, customers can easily find ApeCoin on all major crypto exchanges, including Coinbase, Crypto.com, and Gemini.

According to Yuga Labs, this new ERC-20 token will play a crucial role in the future Bored Ape economy. Anyone who holds ApeCoin tokens could participate in the ApeCoin DAO or purchase in-game items and experiences in the BAYC metaverse.

About one week before launching ApeCoin, Yuga Labs made headlines after reaching a massive deal with CryptoPunks’ founder Larva Labs. Currently, Yuga Labs owns the IP rights to Larva Labs’ CryptoPunks and Meebits NFT collections. With all of these NFTs under its umbrella, analysts believe Yuga Labs could be worth $5 billion.

These exciting developments have sent Yuga Labs’ NFTs to new all time highs. The Bored Ape Yacht Club is now the number one collection on OpenSea, and it has a floor price of 101 ETH (or about $300,000).