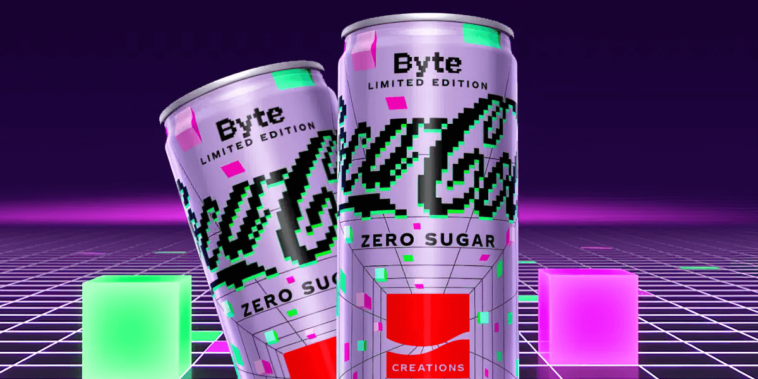 A new beverage is bridging the physical and virtual worlds, and it’s supposed to taste like “powering up a game.” Coca-Cola, the iconic beverage company, revealed today that it has created a pixel-flavored drink that comes with metaverse gaming utilities.

The Coca-Cola Zero Sugar Byte will “bring the flavor of pixels to life” and is the second drink in Coca-Cola’s Creations line. The company has designed the beverages of that line to appeal to Gen Z’s “thirst for discovery” with a series of “unexpected packaging designs,” creative collaborations, and statements about culture.

Those who purchase the Coca-Cola Zero Sugar Byte will be able to participate in a special 8-bit game where players need to navigate a “Byte” up a staircase. The game tracks the times of players, and a leaderboard will display the top finishers.

Oana Vlad, the senior director of global strategy for Coca-Cola, said that for the company’s “second expression” of Coca-Cola’s Creations line, it wanted to create an “innovative taste” rooted in the “playfulness of pixels.” The company had a strong focus on gaming as well.

Players who do not purchase an IRL Coca-Cola Zero Sugar Byte will still be able to play the games on Pixel Point, an island Coca-Cola designed in Fortnite. The drink is currently starting a limited release in Latin American countries. The United States and China will follow in May.

The Intersection Between Gaming & the Metaverse May Be Profitable

One aspect of Web3 that most experts believe will be profitable is metaverse gaming. From Star Atlas to Axie Infinity, companies are seeking to build out Web3 and NFT games to catch the next big wave in Web3.

And it’s not just home-grown Web3 gaming studios that are jumping in. Recently, console and mobile gaming companies, some with decades of pedigree, are launching into the metaverse and NFT fields. Atari has released a set of video game loot boxes. And Krafton, the creators of the hit PlayersUnknown Battlegrounds, has ties to the Web3 space.

There’s no telling if Coca-Cola’s latest Web3 venture will succeed — it has already released an NFT collection in 2021 — but there’s no doubt some will see the new drink as innovative. And tying the IRL “pixel-flavored” drink to an actual game that players can compete in may make the drink more culturally relevant. The reaction to the drink and the game should be interesting, especially among the Gen Z audience.