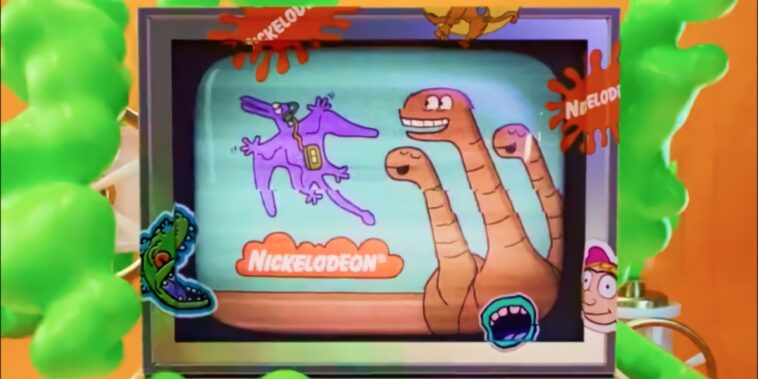 At the start of Nickelodeon’s NFT ad, viewers could see a film rating screen that says, “The Following Program is Rated Web3.” Nick also warns its trailer may induce “Moderate to Severe Nostalgia,” and it says anyone watching this ad is “early.”

After running through a few vintage Nick promos on a TV, green slime covers the screen. At the end, Nick says fans should “Stay Tooned” for more news this summer. It also says its “90s Collection” NFTs will drop on the Polygon-based Recur platform.

Although Nick’s ad is light on details, it features a few notable stickers from hit 90s shows. For instance, viewers could see images of Reptar and Spike from “The Rugrats,” as well as Helga from “Hey Arnold!”

Before nickelodeon_nft posted its “90s Collection” promo, it tweeted a link to a 2021 TechCrunch article detailing Recur’s partnership with ViacomCBS. Besides Nickelodeon and CBS, ViacomCBS agreed to use IP from the following stations in Recur NFTs:

Interestingly, the figurine brand Funko recently dropped Nick-themed NFTs, many of which featured characters from the 90s. While SpongeBob wasn’t in this set, shows like “Rugrats,” “Hey Arnold!,” and “Real Monsters” were available as NFTs.

Speaking of SpongeBob, ViacomCBS has filed NFT-related patents for SpongeBob Squarepants with the USPTO. However, there’s no official word on what characters will be in Nick’s “90s Collection” NFT drop.

Archie Comics is also experimenting with using NFTs to build a Web3 fanbase and create new content. Anyone who buys an “Archiverse: Eclipse” NFT could submit story ideas for an upcoming comic entitled “Archieverse Collides #1.”

There’s also speculation the Walt Disney Company will dive deeper into Web3 in the upcoming years. Disney recently hired a former Apple exec to head its metaverse division, and it continues to drop NFTs on the VeVe NFT app.

Whatever animated series fans are most nostalgic about, there’s a good chance it will soon appear in Web3.