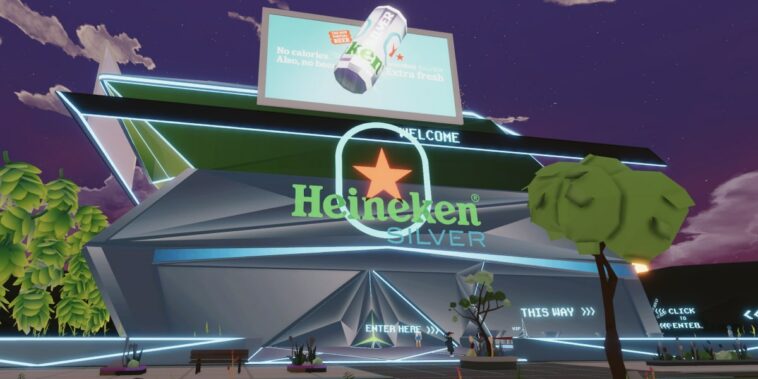 The beer is called Heineken Silver, and the company poked fun of itself in its light-hearted marketing campaign by saying the beer is composed of “100% digital raw materials.” They also added that the hops had been “fermented with Binary Code” and brewed “only from the freshest pixels.”

The real Heineken Silver is a classic lager beer with “a less bitter aftertaste,” which many probably still prefer to its digital counterpart. The virtual beer was designed with the help of Spanish street artist J. Demsky and is self-described as an “inaccessible premium lager” with a “tech and meta finish.”

Heineken’s new brewery in Decentraland is still relatively undeveloped, and currently only contains a talk from the company’s executives. However, users can snap screenshots of the digital brewery and post them with the hashtag #awesomeheinekenmarketatingstunt, according to Heineken’s marketing team.

Drinking Digital Beer in the Metaverse

Heineken is the second major beer manufacturer to enter the metaverse. Earlier in the year, Miller Lite opened a virtual bar just in time for the Super Bowl, also in Decentraland. The idea was to create a place where fans from around the world could come together to watch the big game, and well — drink virtual beer.

The “Meta Lite Bar,” which resembles a traditional tavern, also has bar games like billiards, a dartboard, a photo booth, and a vintage digital jukebox. Miller Lite even included an open mic in their virtual bar.

While the idea of drinking in virtual bars sounds a bit ridiculous, as even Heineken acknowledged in their cheeky marketing campaign, decentralized worlds like Decentraland and The Sandbox are exploding in popularity. Samsung, Sketchers, Vice, and even the bank HSBC also have plots of digital land in Decentraland.

Many brands, companies, and investors see Web3 as the next big thing and are scrambling to get on board the metaverse ship before it sails. And while Decentraland and The Sandbox are maintaining their top spots for decentralized metaverses, tech giants like Meta will likely bring stiff competition to the metaverse space soon.

Regardless of what you think about virtual beer, the metaverse has quickly become an essential place for companies to promote and define their brand, and to try to start new trends and innovations. We’ll see what happens with Heineken pixel-brewed beer.