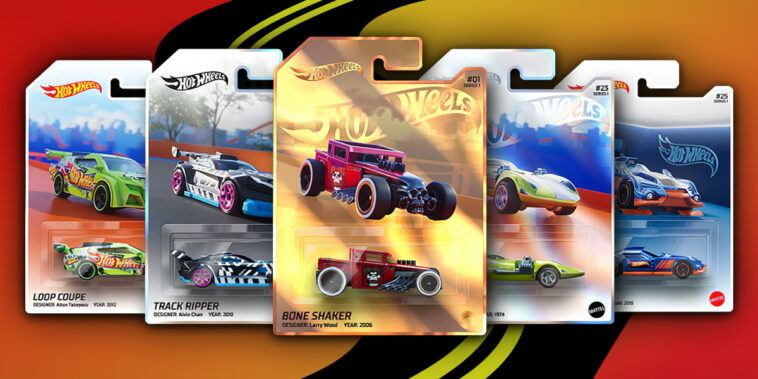 Aside from the new “Showroom” NFTs, all of Hot Wheels’ previous rarity rankings are identical to those used in “Series One.” These categories include:

Also like “Series One,” people who collect a select few NFTs could win a physical Hot Wheels toy.

Anyone with a WAX account can buy a Hot Wheels “Garage Series Two” NFT pack for $25 each. Every pack will have seven mystery NFTs, and Hot Wheels says there will be 26,321 packs up for grabs. So, there will be 184,247 digital collectibles in Hot Wheels’ latest NFT drop.

Hot Wheels will open its “Series Two” NFTs for public sale at 1 PM EST on March 31st. Anyone interested in buying these new Hot Wheels NFTs could join the official queue on Hot Wheels’ website. The toy company also says collectors could resell their Hot Wheels NFTs on secondary markets such as:

Auto Companies are “Racing” Into the NFT Market

It’s not just toy car companies like Hot Wheels that see potential in NFT technology. Many professional auto manufacturers and organizations are interested in adding NFTs to their business models.

For instance, NASCAR partnered with WAX to release its first commemorative NFTs to racing fans. As Rarity Sniper reported, a few lucky spectators at the 2022 Daytona 500 received NFT tickets in their WAX account. NASCAR executives said they would continue to use NFTs to connect with fans at future events.

More recently, Kia Motors announced it will sell six NFT versions of its electric vehicles on the platform Klip Drops. These highly-stylized versions of Kia’s cars are supposed to promote environmental awareness. Each NFT is set to sell for at least $399 per token.

The automaker Alfa Romeo is using NFTs to help create its Tonale SUV. However, Alfa Romeo isn’t selling its NFTs to the public. Instead, the Italian car manufacturer says it wants to use NFTs to verify business documents on the blockchain.

On the subject of high-end Italian brands, Ferrari announced it’s working on an NFT market with the Swiss company Velas Network. Lamborghini also unveiled its first sponsored NFT artwork by Fabian Oefner at the beginning of February 2022.