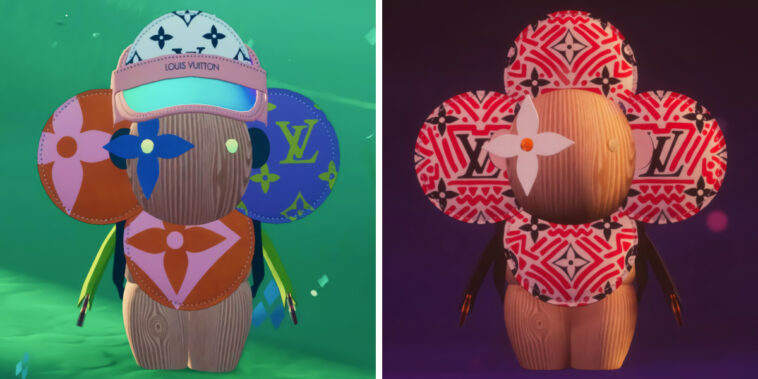 First introduced in August 2021, Louis: The Game lets players enter a virtual world where they can dress up their brand-inspired avatar named Vivienne and collect postcards that educate them about the brand’s 200-year history.

According to Vogue Business, which first reported the story, several new quests and NFT rewards have been added to the game. By collecting a specified number of free NFTs in the app, players can qualify for an NFT raffle — which will be ongoing until August 4th, the brand’s birthday.

Players will also have the chance to win one of ten NFTs featuring Vivienne dressed in a myriad of styles. The NFTs will be transferable across multiple platforms.

The NFTs were created in collaboration with Wenew Labs, a startup company run by the famous digital NFT artist, Beeple, and minted using Louis Vuitton’s Ethereum wallet. Louis: The Game, a free download that is available on Android and Apple, has already been downloaded over two million times according to the brand.

Fashion Rushing for the Metaverse

Louis Vuitton is far from the only fashion brand to invest heavily in NFTs and the metaverse. In March, the popular decentralized metaverse Decentraland hosted the first fashion show in its virtual world. Participants were able to watch virtual runway events and purchase digital clothing and accessories in the form of NFTs.

The metaverse — worlds built for virtual and augmented reality — is estimated to be an $800 billion market opportunity by Bloomberg Intelligence, so it should come as no surprise that brands are investing heavily in the space. And since users enter the metaverse using digital avatars, it goes hand and hand that they would want those avatars to be fashionable.

For fashion brands and designers, the low cost of producing virtual fashion and opening shops in metaverses like Decentraland and The Sandbox is appealing. So is the chance to attract younger, Gen Z consumers who are more invested in digital and virtual spaces.

Time will tell if Luis Vuitton’s NFT rewards will boost gaming activity and sales, but the latest move by the company shows it’s fully embracing NFTs and the metaverse. We’ll be keeping our eye out for more moves by Vuitton in the nascent but steadily growing NFT space.