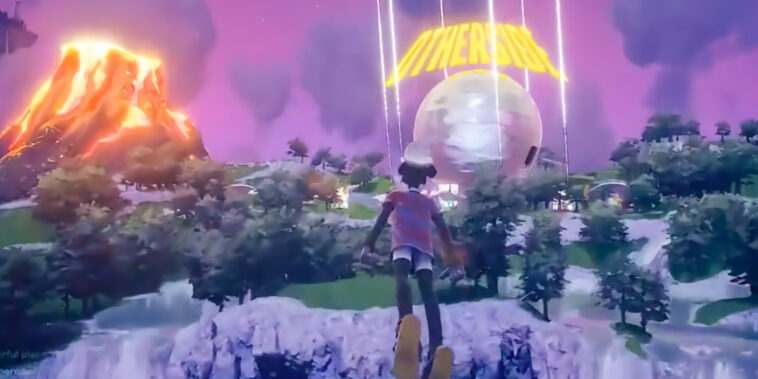 According to The Bored Ape Gazette, the central avatar in this latest “Otherside” promo is none other than Curtis the Ape. On the bottom left-hand side of the screen, viewers could see a few of Curtis’ comments as he explores the “Otherside.”

At the beginning of this clip, Curtis welcomes newcomers to the metaverse with a friendly wave. Soon after, Curtis runs across a bridge and onto what appears to be a teleporter.

In the next scene, Curtis is walking around the Bored Ape Yacht Club’s home base (aka the “biogenic swamp”). In the distance, people could see floating islands, some of which have active volcanoes.

On the bottom right-hand side of this latest “Otherside” promo, there are a few commands with corresponding buttons. The actions revealed in this video include the following:

There’s still no word on when “Otherside” will launch, but the Improbable team recently told reporters it’s in the “early phase” of development.

Pieces of the “Otherside” are Falling Into Place

While there are many mysteries surrounding how the “Otherside” will work, Yuga Labs continues to drop more details with each passing week. Most significantly, Bored Ape fans now have a clearer sense of virtual land rankings in this metaverse.

Two weeks ago, Yuga Labs released 55,000 “Otherdeed” NFTs for virtual land parcels in the “Otherside.” As Rarity Sniper recently reported, the demand for these land NFTs was so high that it temporarily crashed Etherscan.

On the same day as its historic 55,000 “Otherdeeds” sale, Yuga Labs granted land NFTs to current Bored Ape and Mutant Ape holders. In total, there are 200,000 land parcels in the “Otherside.”

Now that “Otherdeed” NFTs are available on markets like OpenSea, it’s easy to see each virtual land plot’s traits and rarity rankings. While there are many ways to categorize “Otherdeeds,” the five critical “sediments” are as follows:

Of these five, the Biogenic Swamp is the rarest at just 7.95 percent of the collection. Infinite Expanse “Otherdeeds” are the most common at about 26.97 percent.

Each “Otherdeed” land parcel could have various artifacts or minerals that could be used for in-game experiences. Also, 10.03 percent of “Otherdeeds” come with a rare creature known as a “Koda.”

“Otherdeeds” remain one of the most actively traded NFTs on OpenSea, and they currently have a floor price of about 3 ETH (~ $6,000).