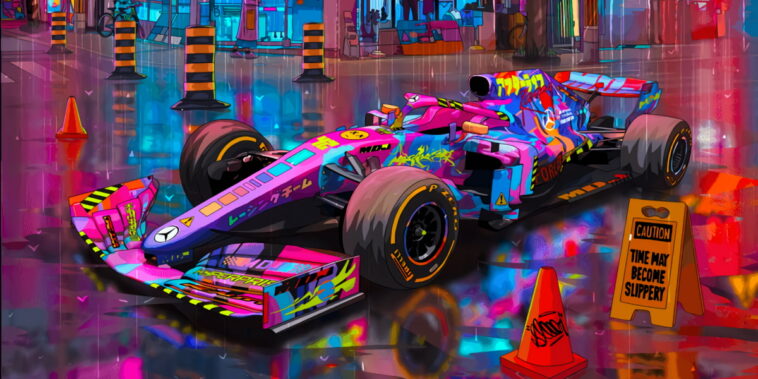 The Mercedes-AMG Petronas Formula 1 Team has partnered with FTX US to launch a series of non-fungible tokens modeled after ticket stubs. The first series of 1,000 NFTs will debut on Friday, May 6th, with free claiming available on the FTX US marketplace.

Richard Sanders, the Commercial Director of the Mercedes F1 team, said that a key priority for the team is to find “new and innovative” ways to engage their fanbase. The 2022 Mercedes F1 NFTs will “unlock new ways” fans can grow closer to the racing team.

The Mercedes team is billing the NFTs themselves as a way for racing fans to connect. Through a shared passion for the sport and collectibles, fans can form a community. The artist for the NFTs will vary, with Mad Dog Jones illustrating the first set.

While only 1,000 NFTs will be made available for the Miami race, other events may have up to 2,500 NFTs for sale. There will be up to five drops, each at different races.

Aside from the NFT ticket stubs, the Mercedes team plans several “special” NFT auctions throughout the racing season. The first, occurring when the team races in Miami, will involve unique Mad Dog Jones illustrations paired with rear wing endplates of two drivers.

Avi Dabir, a Vice President at FTX, said that the team at FTX hopes the Mercedes F1 NFT collection drop will be “an amazing experience for NFT collectors.”

While the Mercedes NFT drop is a boon for F1 fans, the company isn’t the first to wade into NFTs. Red Bull, known for F1 sponsorships, has released NFTs through the platform Sweet. Alfa Romeo, a Swiss team, has launched an NFT collection. And McLaren has created the McLaren Racing Collective, where fans can collect digital car parts and build a vehicle.

The larger industry of sports has remained bullish on NFTs as well. On the basketball side, the National Basketball Association has launched an NFT set called “The Association.” The Golden State Warriors and San Antonio Spurs have tried to engage their fanbase with NFTs. And Dapper Labs (a top NFT company) has continued to create short NFT video highlights, which some see as the next extension of trading cards.

Soccer clubs are also active in NFTs and the metaverse. FC Barcelona has stated its Web3 ambitions, which include NFT collections. Man City has floated the idea of building a digital soccer stadium in the metaverse. And Sorare, which produces NFT soccer trading cards for an online fantasy game, had a monster funding round just a few months ago.

Time will tell if the Mercedes F1 Team’s effort is successful, but there is little doubt that digital collectibles and sports seem to go hand in hand.