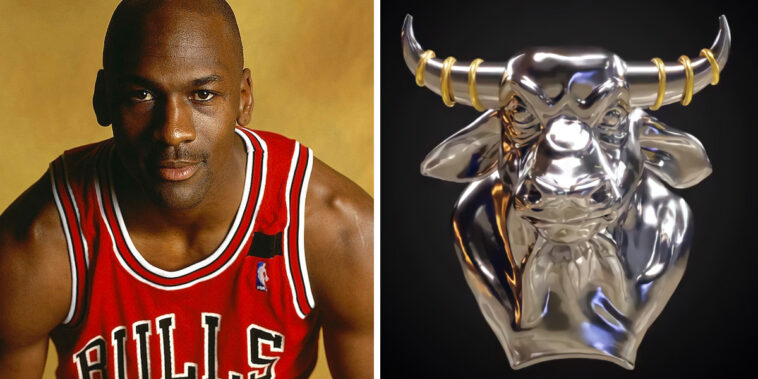 His Airness has officially entered the metaverse. Launched on March 3rd, Michael Jordan’s first NFT collection, 6 Rings, sold out. It marks Jordan’s first venture into the wild world of non-fungible tokens as a creator.

6 Rings is a collection of 5,005 bull busts with six rings draped around the bulls’ horns. The collection is a homage to Jordan’s stellar playing career for the Chicago Bulls — the six rings representing championships and the 2.3 SOL mint price his famed 23 jersey number.

The collection is available for secondary purchase on Heir, an NFT platform that aims to connect fans with athletes (also a Jordan venture), and Magic Eden, a top Solana NFT marketplace. It is the debut collection on Heir, which is supposed to be the first of many to come.

Holders expect to receive various rewards for holding a 6 Rings NFT, including access to exclusive content and limited access communities called “Huddles.” Initially, the collection creators expected to sell out 10,010 NFTs, but due to the slow sales for the mint, the total supply for the collection was cut in half.

The low demand may speak to the difficulty of launching this type of NFT collection or the challenges of launching a project in the middle of a widespread NFT bear market.

Off the court, Jordan has made waves as a business investor. He’s the owner of the Charlotte Hornets, an NBA franchise, and an investor in Sportradar and DraftKings. However, it might surprise that he’s an active investor in Web3 companies, even before his Heir and 6 Rings ventures.

Part of his investments has stayed related to the court. He has allocated a portion of his wealth towards Dapper Labs, the company behind NBA Top Shot. Although Dapper Labs hasn’t used clips from Jordan’s playing days as moments, Jordan can still benefit from the best Web3 sports collectible company in the space.

He has also participated in a $46 million funding round for the Metaplex Foundation and invested in crypto game maker Mythical Games. Of course, his Heir platform hasn’t been too shabby raising money either. It recently had a $10 million seed round stage led by Thrive Capital.

However, if Heir succeeds, it will have to beat competition from another GOAT — Tom Brady’s Autograph. Like Heir, Autograph attempts to connect fans with athletes and offers exclusive content to appeal to users.