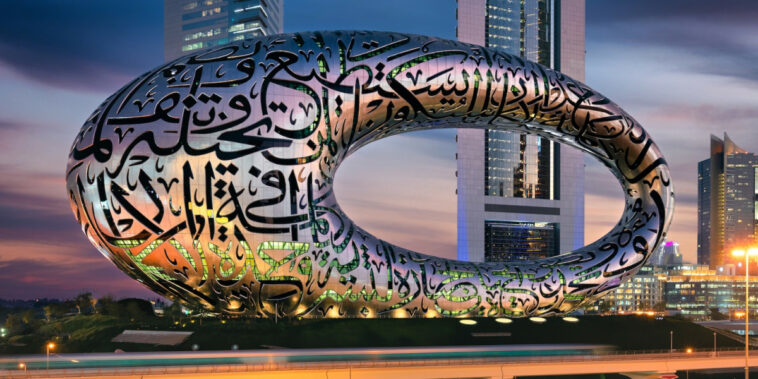 After opening a few weeks ago, Dubai’s Museum of the Future wants to bring its purposeful innovation to the metaverse. The Museum has partnered with Binance NFT to launch a series of NFT collections, starting with “The Most Beautiful NFTs in the Metaverse.”

According to a press release, the Museum wants to act as a pioneer in the crypto-technology space. To that end, it is working on a range of virtual assets and products to sell.

Lath Carlson, the Executive Director of the Museum, said the drops are the first of many projects where the Museum will work with the world’s brightest minds. The goal is to construct “high impact developments” that will shape the future.

Helen Hai, the Head of Binance NFT, said the company is honored “to partner with the Museum of the Future” in Dubai. Binance looks forward to working with the Museum to produce “industry-leading digital products” that further the adoption of the blockchain in the region.

The Museum of the Future is an obelisk-structured building that rises 77 meters above the ground. It has 1,204 stainless steel panels, on which the Museum has inscribed three poems from Sheikh Mohammed bin Rashid Al Maktoum, the ruler of Dubai. The Museum has exhibitions that stimulate all five senses and lie at the intersection of science and technology.

As for the drop of “The Most Beautiful NFTs in the Metaverse,” neither the Museum nor Binance have set a time frame. The press release mentioned no other specifics as well, such as the number of NFTs or the price. Those who are interested in the drop can sign up to receive announcements at the following link: https://nft.museumofthefuture.ae/

The Museum of the Future’s NFT drop is not the first time Dubai has indicated its Web3 ambitions. While many countries are grappling with the issues blockchains and Web3 tech present, Dubai seems to be full steam ahead.

A few days ago, Emirates Airline announced it would start accepting payments in Bitcoin. The airline is also interested in launching an NFT collection that will offer customers IRL and metaverse perks.

Finally, Nestlé created two snow-globe NFTs to promote the launch of its TRIX cereal line in the Middle East. At the time, Emilien Mesquida, the business executive officer of Cereal Partners Worldwide, said the company was proud to launch the first blockchain-based initiative in the region that goes to a humanitarian cause.

There’s no telling how successful the Museum of the Future NFTs will be, but there’s no doubt that Dubai wants to be a player in Web3.

Museum of the Future