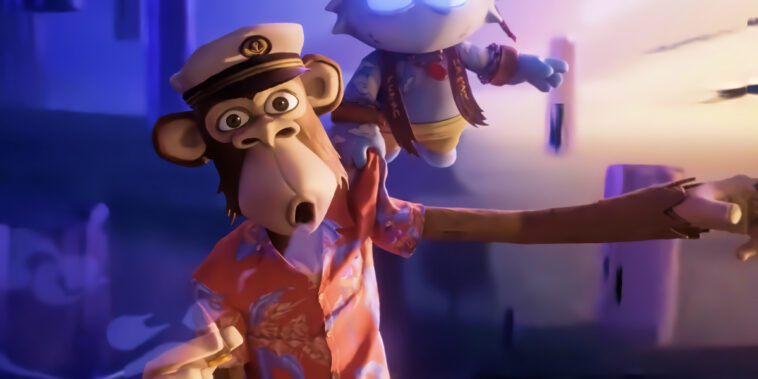 The demand for Otherdeeds was so intense that it caused a surge in Ethereum gas fees and multiple failed transactions. The website Etherscan also temporarily shut down during the April 30th land sale. Current estimates suggest Otherdeed buyers spent $177 million worth in ETH on gas.

To make its first land auction as fair & smooth as possible, Yuga Labs only allowed wallets that submitted KYC info via Blockpass to mint Otherdeed NFTs. Yuga Labs also enforced a strict two Otherdeeds per wallet during the public mint.

Initially, Yuga Labs considered using a Dutch auction bidding mechanism for its “Otherside” land parcels. However, the team later decided to set a fixed price of 305 APE per Otherdeed to avoid “gas wars.” At the time of the Otherdeed mint, APE was trading around $20 per token, so each Otherdeed sold for approximately $6,100.

The 55,000 Otherdeeds available in this first public launch could be located in one of the three following metaverse districts:

The Otherside metaverse will have 200,000 plots of virtual land. Although only 55,000 NFTs were sold to KYC-approved wallets, Yuga Labs reserved 10,000 Otherdeeds for BAYC holders, 15,000 for itself, and another 20,000 for MAYC members. There’s no word yet when Yuga Labs will release the remaining 100,000 Otherside land parcels.

People who weren’t able to mint an Otherdeed could now find these NFTs on secondary markets like OpenSea. Currently, the floor price for an Otherdeed NFT is about 7 ETH ($19,500).

As mentioned above, BAYC and MAYC members are entitled to one Otherdeed per NFT. Unlike the 55,000 NFTs available for public sale, the Otherdeeds for Bored Ape and Mutant Ape holders will be in exclusive metaverse areas.

According to Yuga Labs, anyone with a BAYC NFT will get land in the central “Biogenic Swamp” area. Those who hold a Mutant Ape will enjoy virtual land in a section called “Chemical Goo.”

However, it’s not just the promise of VIP virtual land that sent BAYC and MAYC NFTs to the moon. Yuga Labs continues to tease a new NFT creature called a “Koda.” Although not much is known about how Kodas will function in “Otherside,” many believe they will be valuable and that Yuga Labs will airdrop them to NFT holders.