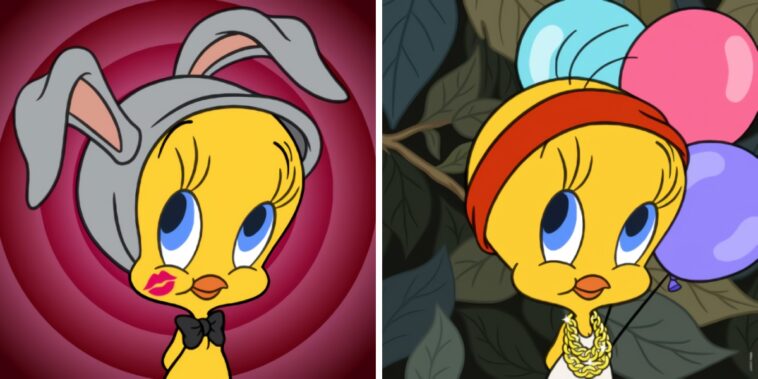 According to a recent press release, Warner Bros. will launch an NFT collection inspired by its beloved “Looney Tunes” cartoons. Entitled “Looney Tunes: What’s Up Block?,” these new NFTs will feature all of the iconic characters from the decades-long animation franchise.

To kick off this new collection — and to honor his 80th birthday — Tweety Bird will be the first “Looney Tunes” character available as a PFP NFT. It’s unknown which character is next in line for Warner Brothers’ NFT set, but The Hollywood Reporter speculates Bugs Bunny and Marvin the Martian are on deck.

Anyone who owns an official “Looney Tunes” NFT will enjoy access to upcoming special events, rewards, and games. Warner Bros. also says it plans to use these NFTs to develop a “fresh narrative” for a brand new “Looney Tunes” cartoon.

When asked why it chose to bring “Looney Tunes” into the metaverse, Warner Bros. executives frequently mentioned increased “fan engagement.” Warner Bros. is also keen to experiment with novel forms of NFT-based storytelling.

Every “Looney Tunes” NFT will mint on the Palm blockchain on the site Nifty’s. Warner Bros. previously worked with Nifty’s on its Space Jam and Matrix NFT drops.

Indeed, Nifty’s is using its previous Space Jam NFT collection to determine who gets on its “Looney Tunes” NFT whitelist. If collectors have a Tweety or Monstars Space Jam NFT in their wallet on June 15th, they will qualify for the Tweety Bird NFT presale.

Note: Only Tweety Space Jam NFTs in the Rare, Legendary, or Epic categories will give holders a presale spot. Nifty’s will launch its Tweety Bird NFT presale on June 20th, and the public sale will begin the following day.

Many centuries-old animation studios appear to see the same potential for using NFTs that Warner Bros. sees. For example, last month, the legendary Archie Comics dropped an innovative “Archiverse: Eclipse” NFT collection based on “The Chilling Adventures of Sabrina.”

Dr. Seuss is yet another classic name in animation that has begun using NFTs to build an online community. Today, fans of “The Grinch” or “The Cat in the Hat” can collect “Seussibles” NFTs on the Flow blockchain.

There’s also speculation that “Nickelodeon” parent Paramount and the Walt Disney Company will bring their animated films and series into Web3. It may not be long before characters like Spongebob and Mickey Mouse make a big move into the metaverse.