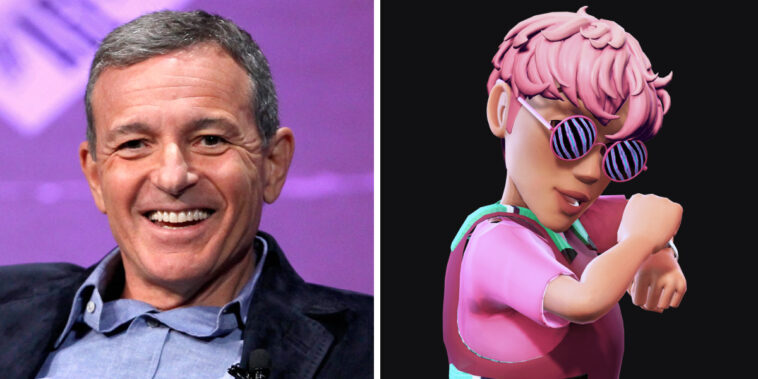 Robert Iger is betting big on the metaverse. Iger, the former Disney CEO and board chairman, announced on Twitter Monday that he is joining Genies, a five-year-old start-up that has created a mobile app where users can create avatars.

In a statement, Iger said that he is drawn to the intersection of “technology and art” and that Genies creates opportunities for users to express themselves and communicate.

Genies CEO, 29-year-old Akash Nigam, emphasized the impact Iger will have as both an investor and member of the board, saying he can’t think of a better “creative and product thinker” than Iger with which to collaborate.

Iger has always been knowledgeable about technology’s role in communicating and storytelling. In his 15-year tenure as Disney’s CEO, he oversaw the $7 billion acquisition of Pixar and the development of streaming technologies within Disney’s suite of products.

Lately, he has expressed an interest in the metaverse, believing that the next iteration of the internet — what some call Web3 — will be more immersive and have more dimensions than previous iterations. This evolution will allow for the opportunity to tell more detailed stories.

Web3, a term that encompasses cryptocurrency, non-fungible tokens, and the metaverse, poses intriguing possibilities — ones that top companies are recognizing.

Gucci, Miller Lite, and Tokens.com have bought virtual land in the metaverse in the past two months. Victoria’s Secret, McDonald’s, and L’Oreal have filed trademark applications related to Web3. And Nike has launched its first NFT collection in conjunction with its recently acquired RTFKT.

Meta, formerly known as Facebook, recently sparked interest in the metaverse with its name change. During the announcement, it publicly stated its ambitions to be a significant player in Web3 and later floated the idea of adding an NFT marketplace to Facebook and Instagram.

Iger’s new company, Genies, is well-versed in Web3. Its avatar-producing app boasts celebrities as users, including Justin Bieber, Cardi B, and J Balvin. The hope for Genies is that the metaverse won’t be a single universe but a compilation of different, smaller universes within which users can import their avatar.

That kind of structure would position Genies as the shovel maker in the Web3 goldrush, meaning someone who provides the tools rather than digs for gold themselves.

There’s no telling how Iger’s move will pan out, but if his track record is any indication, Genies has a stellar person on its team, one capable of leading a technology-focused group.