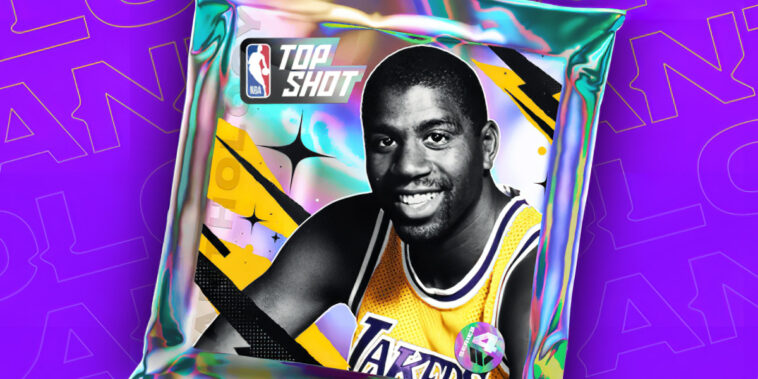 One of the best basketball players to ever play the game, Earvin “Magic” Johnson, is launching an NFT collection with NBA Top Shot called “The Anthology: Magic Johnson.”

The NFT collection will consist of 1,600 NFT packs featuring important moments in Magic’s career. On Monday, the 5-time NBA champion expressed his excitement to partner with NBA Top Shot in a Tweet.

The collection will contain four Rare and Legendary Magic Johnson Moments. They go by the names “Never Fear, E.J. is Here,” “Now You See It, Now You Don’t,” “Hocus Pocus Pass,” and “Game, Set, Magic.” Each Magic Moment was picked by Magic himself.

Here is some more information about the drop:

Although this is Magic’s first NFT collection, he certainly has the fanbase to back it up. And NBA Top Shot, a joint venture between the NBA and Dapper Labs, has had huge success selling collectible digital assets since its debut in 2020.

NFTs are unique digital assets that can be safely stored and traded on blockchains, and the nascent technology has been having a huge impact on sports and collectibles. In many ways, NBA Top Shot has shown that the new trading card is digital, and several sports leagues and teams have followed suit and hopped on the NFT bandwagon.

But perhaps no other sport like basketball has had as much impact on the NFT space. Below are a just a few of the headlines we’ve reported at Rarity Sniper over the past year related to basketball and NFTs:

Beyond these headlines, several NBA players are holders of blue-chip NFTs. Stephen Curry, Paul George, Tyrese Haliburton, Josh Hart, and Hassan Whiteside are just a few of the NBA stars who hold NFTs and endorse them publicly.

Only time will tell if Magic Johnson’s NFT project will be a success. But he is certainly one of the most iconic and beloved NBA players to ever step on the hardwood, and he has always been known for his creativity — both on and off the court. Having a partner like NBA Top Shot and being part of a community that includes all the names above certainly can’t hurt either.