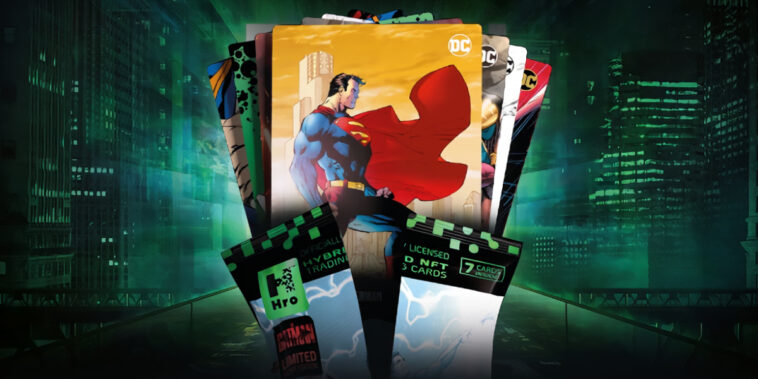 The physical trading cards, priced between $5 to $120, are being designed by Cartamundi Group, a card and board company, and feature 155 different superheroes and supervillains. Characters from “The Batman,” Warner Bros.’ most recent release starring Robert Pattinson will be included.

For the NFT component of the physical cards, users must download a mobile app called Hro. Each physical trading card comes with a unique QR code that connects the NFT on the Hro app to the physical card. The Hro app also connects users to a global NFT marketplace where they can buy, sell or trade their Warner Bros. NFTs.

The NFTs will be minted on Immutable X, a sidechain to the Ethereum blockchain, and are expected to be available sometime this month with more content coming throughout the year.

DC Hybrid Trading Cards by Hro consist of six card packs that range between seven and 168 cards. The studio is excited about non-fungible technology and believes it will give fans the possibility to engage in new ways with characters from the “DC Multiverse.”

The NFTs are being dubbed as dual-utility assets since users will be able to explore exclusive DC content, collect rare art and movie memorabilia, compete in challenges, receive monthly airdrops, and unlock rewards and experiences.

Cinema Shifts Towards NFTs and the Metaverse

This year has seen all sorts of brands and companies invest in NFT technology to excite their fans and provide new experiences, and media and entertainment companies have been at the forefront.

Just a few months ago, Disney applied for a “virtual-world simulator” patent — suggesting it could be putting together plans to invest more heavily in NFTs and the metaverse. Also, Warner Bros.’ rival Marvel Entertainment has launched several NFT projects over the past twelve months.

Earlier in the year, AMC Theatres partnered with Sony Pictures for a successful NFT distribution to select purchasers of “Spider-Man: No Way Home,” and in exciting news for meme coin enthusiasts, the giant theater chain also announced it would be accepting Shiba Inu and DogeCoin payments for tickets through the payments provider BitPay.

Since NFT technology enables exciting new ways for fans to collect and trade characters, it could be ideal for companies like Warner Bros. who already have tons of content and characters to choose from. We’ll be keeping our eye out for when the DC Hybrid Trading Cards officially drop.