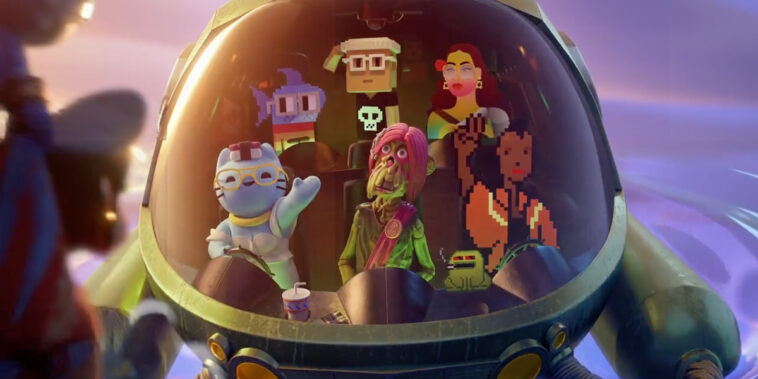 Yuga Labs, the creator of the Bored Ape Yacht Club collection, announced it has raised $450 million at a $4 billion valuation to build a media empire around its non-fungible token collections.

The company will start with its widely-anticipated Otherside metaverse, which BAYC CEO Nicole Muniz describes as “opening the door to a walled garden.” The Otherside metaverse, which according to a leaked pitch deck, will have an upcoming large-scale land sale, plans to be a “gamified” and “completely decentralized” world, according to Yuga Labs co-founder Wylie Aronow.

Recently, the company teased the public with a short video previewing the “Otherside” metaverse. The short clip features NFT collections not owned by Yuga Labs, including the Nouns projects and the Cool Cats collection. The goal may be to connect different parts of the NFT universe and allow for a social gaming experience run by the players.

In addition to Otherside, Yuga Labs plans to release a play-to-earn game later this year.

After the successful launch of its Ape vs. Mutant game in late 2021, Yuga Labs had gone quiet. While there were rumors of significant moves and plans on the roadmap for Q1, the company at the helm of the most successful recent NFT project wasn’t saying much. But that all changed in March of 2022 when three events sparked headlines across the country.

First, Yuga Labs acquired the revered CryptoPunks and less-well-known Meebits collections from Larva Labs in a deal with undisclosed terms. Although Yuga Labs publicly stated it wouldn’t do anything with the CryptoPunks collection — considering it historic — it did give commercial rights to all CryptoPunks holders, an issue that had ailed Larva Labs for months.

Second, Yuga Labs issued the long-awaited ApeCoin ($APE), which quickly jumped into the top 100 coins in cryptocurrency based on market cap. The airdrop delivered large sums of money for Bored Ape holders, some of whom had held onto their Ape assets through financially challenging times. The airdrops ranged from the tens of thousands of dollars to the millions.

Third, Yuga Labs fell victim to a leaked pitch deck, which spelled out its plans to create a metaverse. Although a Yuga Labs co-founder later denounced the leak, claiming the pitch deck was “old,” it seems to be at least partially correct and signals the company’s move from an NFT company to a broader, Web3 company.

There’s no telling how Yuga Labs will use the money raised from the venture capitalists, but it has shown an uncanny ability to make the right moves since arriving in the NFT space in May of 2021. And if nothing else, it keeps the space on its toes.