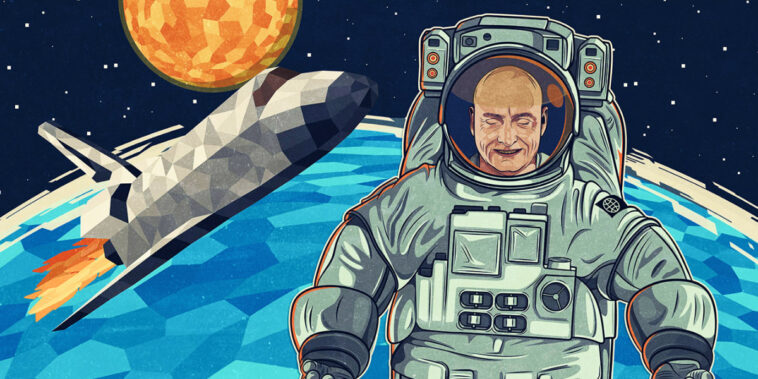 Scott Kelly can now add a successful “launch” into the metaverse to his distinguished resumé.

On April 12th, the former NASA astronaut dropped his first NFT collection, “Dreams Out of This World, Postcards from Space,” on OpenSea. All of the 3,333 NFTs in Kelly’s collection sold out in a couple of hours.

Kelly says he received $500,000 from his first OpenSea sale. However, the retired astronaut isn’t keeping these proceeds, nor is he reinvesting them into NASA programs. Instead, Kelly says all of this money will directly help Ukrainians via the Global Empowerment Mission (GEM).

The “Dreams Out of This World” NFTs feature Kelly in unique astronaut suits with various space-themed animated backgrounds. NFT holders will have to wait till 9 AM PT on April 15th to see what features are on their digital collectible. The NFT production company Orange Comet helped design Kelly’s first NFT collection.

In recent interviews, Kelly said he hopes his NFTs will inspire a new generation of space adventurers. He also predicted NFTs and the metaverse will soon become dominant features of everyday life.

People can still find “Dreams Out of This World” NFTs on OpenSea’s secondary market. Currently, the floor price for one of Kelly’s NFTs is 0.05 ETH (or $150).

Space-Themed NFTs are Attracting a lot of Attention

It has been a busy few months for space-themed NFTs. A few days ago, Rarity Sniper reported on Axiom Space’s multiple NFT drops for the Ax-1 Mission. From April 12th through April 18th, the Austin-based space travel company will release NFT patches and art pieces — some of which will be minted from the International Space Station (ISS).

Famous sculpture artist Jeff Koons also announced he will release his first NFT collection with a lunar theme. Not only that, Koons plans to link his NFTs with physical sculptures and send those artworks to the moon’s surface. Recent reports suggest Koons will launch his moon-bound rocket from Cape Canaveral in late 2022.

Interestingly, there are now dozens of NFTs that first took a ride in a physical spaceship. From Kings of Leon songs to classical recordings by Debussy, it’s becoming increasingly common to find NFTs that went to space.

Even Lamborghini couldn’t resist jumping into the hot space NFT market. A few months ago, the Italian carmaker released special “Space Keys” made with carbon fiber that went to the ISS. People who got one of these devices could access one of five exclusive NFT artworks.

While NASA said it wasn’t interested in minting official NFTs, it’s clear there’s a frenzy for all things space-related in today’s NFT market.