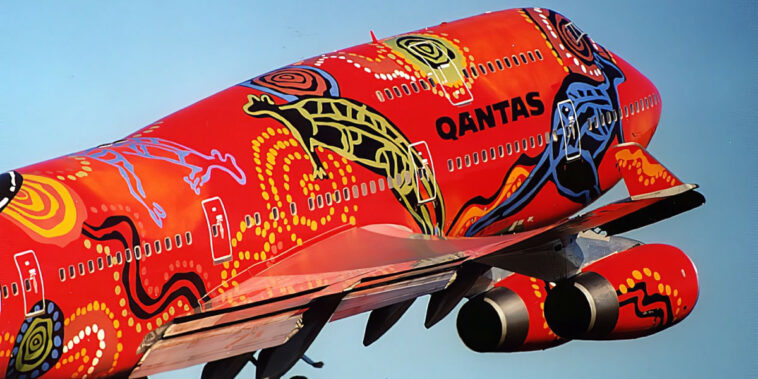 Although there’s no official release date for the Qantas NFT Market, initial reports suggest it should go live in mid-2022. Once Qantas drops its first NFT collection, the company says customers could buy and sell digital tokens on its platform.

Qantas didn’t reveal any details on what NFTs would be available on its upcoming site, but it says each virtual collectible will be a “one-of-one” NFT. The Sydney-based company also says its NFTs will offer customers a way to own “a piece of Qantas history.”

The current image on Qantas’ NFT portal shows two pictures of Boeing 747s with the official Qantas logo. It’s unknown whether these photos will be the first NFTs on the Qantas NFT Market.

Besides their intrinsic value for collectors, Qantas’ NFTs will offer special benefits to token holders. Anyone who mints a unique Qantas NFT will get bonus Qantas Points on their Qantas Frequent Flyer account. The airline hinted that many Qantas NFTs will come with extra perks, but it didn’t reveal any specific rewards.

Qantas also stressed that it’s working with an eco-friendly blockchain. However, there’s no word on what blockchain Qantas chose to host its upcoming NFTs.

Cryptocurrency and NFTs are having fascinating impacts on the travel and airline industries. For instance, the small airline ​​Ravn Alaska developed an Ethereum-based cryptocurrency called FlyCoin to reward customers. In addition to Ravn Alaska, Northern Pacific Airways offers customers FlyCoins for every mile they travel.

Speaking of travel, many hospitality brands have begun using NFTs and cryptocurrency. The hotel brand Marriott Bonvoy hosted an NFT giveaway with MoonPay, and the Italian hotel Ca’ di Dio auctioned NFTs that doubled as room passes. Even the vacation rental platform Airbnb says it wants to get involved with cryptocurrency.

More surveys suggest customers are as interested in crypto-back rewards as travel perks or frequent flyer points. Researchers at Visa found that about 57 percent of respondents want the option to earn crypto in future rewards programs.

The card issuer i2C Inc. says the growth in crypto-backed card issuance rose eight times faster than traditional credit and debit cards from 2020 to 2021. Although the crypto card market isn’t as large as standard offerings from Visa or MasterCard, it’s increasingly difficult to ignore.