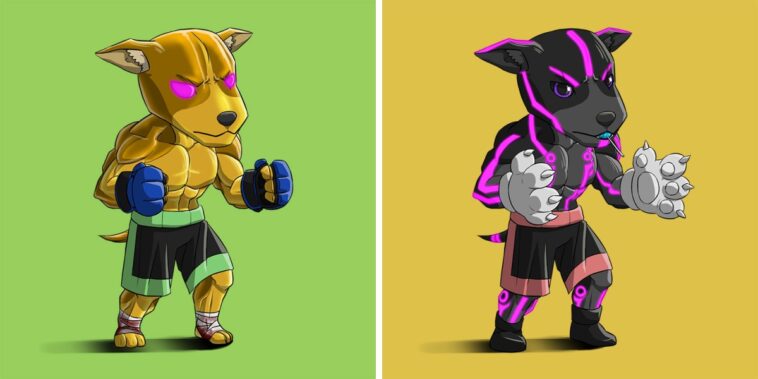 Manny Pacquiao, one of the greatest boxers of all time and a senator in the Philippines, is launching a non-fungible token (NFT) collection to commemorate his late Jack Russell Terrier.

The canine themed generative NFT collection will consist of 9,999 NFTs that pay tribute to Pacquiao’s pet Pacman, who was accidentally killed by a car in 2020.

The Pacman NFTs, which all depict cartoonish dogs in fighting stances, will have skill-based and visual attributes such as stamina and strength and are divided into three tiers according to their skill level and rarity. To earn rewards, holders will be able to compete in the blockchain-based game Pacman Boxing League.

The NFTs will also come with in-real-life (IRL) utilities: Holders can redeem them for autographed merchandise, tickets to live events, or the chance to meet the 12-time world boxing champion. Though the blockchain that will host the NFT collection has not been announced yet, the project is expected to drop on July 15, 2022.

Boxers Invest in NFTs and Web3

Manny Pacquiao delving into NFTs should come as a surprise to no one. After all, this is a man who launched a bid to become the president of the Philippines last year. Though it was unsuccessful, he isn’t afraid of taking chances.

But Pacquiao is far from the only athlete to invest in NFT technology. He isn’t even the only boxer. The heavyweight champion of the world Tyson Fury released a 1:1 commemorative NFT before the proclaimed last fight of his career against Dillian Whyte. The NFT came with several URL utilities, including two ringside tickets to the Whyte match and the chance to spend a day training with Fury himself.

Floyd Mayweather, arguably the best pound-for-pound boxer ever, held the first NFT boxing match in Dubai on May 14th, and NFT holders around the world were granted access to an exclusive live stream of the match and several other IRL utilities. And YouTube star turned boxer Logan Paul is deep in the NFT game, recently filing trademarks that suggest he plans to open his own NFT marketplace.

Because NFT technology allows for digital assets to be traded and stored securely on blockchains, they are transforming how athletes can connect with their fans. And entrepreneurial-minded boxers are taking notice.

Time will tell if the Pacman NFT drop will be successful, but it certainly has a nice sentiment: The great boxer wants his beloved Jack Russel immortalized on the blockchain. For NFT enthusiasts, boxing fans, and dog lovers — that kind of intention might be something to get behind.