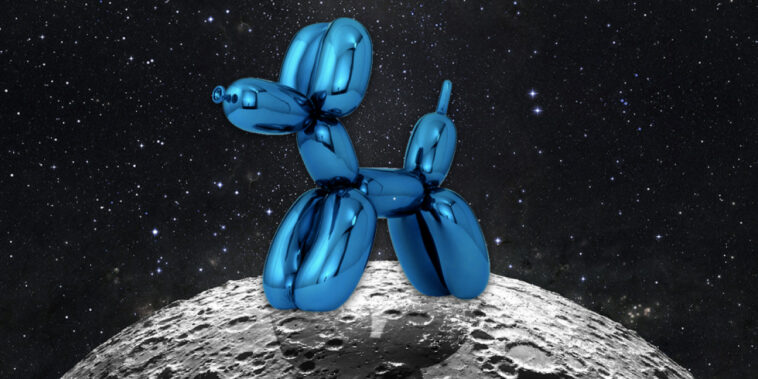 For his first NFT collection, Jeff Koons says he will create an assortment of space-themed sculptures with corresponding NFTs. For extra fun, the American artist plans to send a few of his physical sculptures onto the moon’s surface in late 2022.

Although Koons didn’t release details on what his new art project will depict, he says his NFTs will center around the history of space exploration. The literal launch of “Jeff Koons: Moon Phases” will take place in Cape Canaveral and coincide with the 50th anniversary of Apollo 17’s moon landing.

A percentage of the sales for “Jeff Koons: Moon Phases” NFTs will go to the NGO Doctors Without Borders.

People in the art community have known Koons was interested in NFTs for some time. In 2021, Koons announced in Munich that he was working on his first set of digital collectibles. Koons has also grown closer with the digital art gallery Pace Verso, which will be handling the upcoming “Jeff Koons: Moon Phases” auction.

If past sales are any indication, Koons’ first NFT collection could become one of the highest-grossing NFT projects. Koons is already the most financially successful living artist, and he holds some of the all-time records for sculpture sales.

Most famously, Koons sold his balloon animal-inspired Rabbit for $91.1 million in 2019. For comparison, the highest price for a single NFT remains the $69 million purchase of Beeple’s “Everydays – The First 5000 Days.”

NFTs and Crypto are “Going Galactic”

While Jeff Koons’ space mission marks the first time physical artwork will land on the moon, it’s not the first time crews have sent NFTs into space. In the summer of 2021, Artemis Music Entertainment sent an audio copy of Debussy’s “Clair de Lune” to the International Space Center and then minted it as an NFT. The artist Micah Johnson also sold an NFT entitled “Why Not Me,” which first traveled into space.

The lucky travelers on Elon Musk’s Inspiration4 launch also brought NFTs into outer space. The band Kings of Leon agreed to send an NFT version of their song “Time in Disguise” on an iPhone on Inspiration4’s 2021 space flight.

Musk himself has stated he will launch a satellite to celebrate his favorite cryptocurrency: Dogecoin. In fact, SpaceX’s DOGE-1 satellite received most of its funding in the popular meme token. Musk also accepts Dogecoin for select merchandise on Tesla’s website.

While these announcements suggest there’s high demand for space NFTs, collectors shouldn’t expect official NASA digital tokens anytime soon. NASA publicly said it’s not going to use NFT technology for its images and media. The US space agency’s main issue with NFTs is that they create copyrights on the blockchain for their owners. NASA wants the public to use its pictures freely for educational purposes.