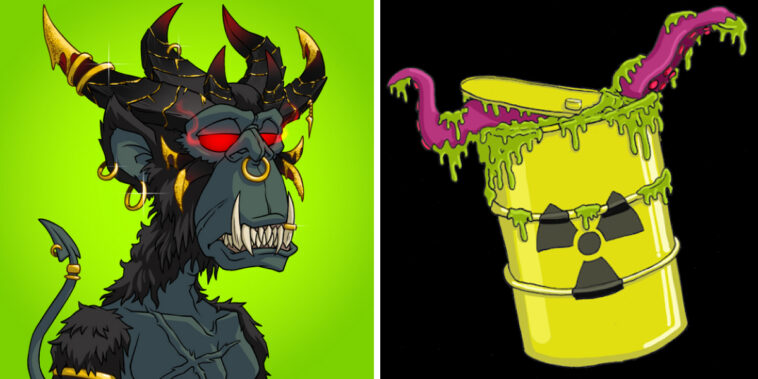 In a Twitter space this past Monday, prominent NFT collector 0xb1 teased a mega mutant activation on February 12, 2022, the day before the SuperBowl. The collector, the owner of the Devil Mega Mutant, posted an image of a barrel of mega mutant serum on Twitter the day after the space with the date “2.12.22” in pink:

Rumors ran wild on that Twitter post and another highlighting the event, with various people asking, “What is an activation?” and others excited about the possibility of seeing one of the few remaining mega mutants.

The teaser comes the months after another announcement — that the person behind the 0xb1 account had signed with Creative Artists Agency, a global talent agency that represents big-name celebrities like Steven Speilberg and Reese Witherspoon, as well as NFT Bored Ape member Jenkins the Valet.

The nature of the event remains to be seen, though it is certainly much-anticipated.

The Mega Mutants (part of the Mutant Ape Yacht Club, which is a sister collection to the Bored Ape Yacht Club) have gained popularity as thousands recently tuned in to watch Tyler Gerring’s mutant chug the M3 serum and transform into the DMT mutant.

There are a total of 10 Mega Mutants currently, and they are all essentially 1/1 NFTs, meaning they have few if no generative art traits. Because of this, they are highly sought after and expensive. A collector can only create a Mega Mutant if they drink an M3 or Mega Mutant Serum, of which there are only just three left.

Like the Mega Mutants themselves, the M3 serums that create them are expensive and have been growing in price the last couple of months. Recently, the CEO of Chain purchased one for nearly $6 million, with the CEO rumored to be using it on a “Gold Fur” Ape to create the “Gold Mega Mutant.”