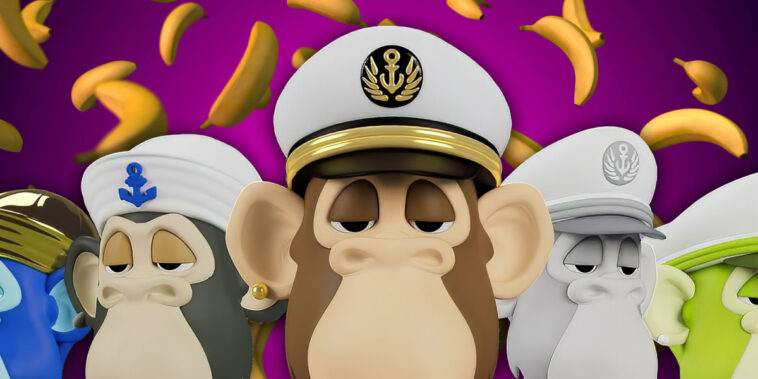 On April 13th, SuperPlastic, the leading company in vinyl collectibles, teased its BAYC collab drop on Twitter, writing, “APE VINYL THIS WEEK” with two obscure black and white photos: one of Curtis, the Bored Ape mascot, and another of Ape #6984, which SuperPlastic purchased earlier this year.

According to NFT Evening, the SUPERBORED drop will consist of five vinyl collectibles, some available to select NFT holders:

There’s no word yet on whether the five vinyl collectibles dropped will come as non-fungible tokens that can be redeemed for physical merchandise. However, it is known that the vinyl figurines will include multiple colorways and special editions for the BAYC community. The drop is expected to take place on April 14th at 1 PM EST. SuperPlastic has already built a reputation in Web3, collaborating with Paris Hilton, Gucci, and others.

Yuga Labs, the Creators of BAYC, Has Been Busy This Year

Many observers were looking to Yuga Labs to make moves after a mostly quiet 2021 that saw its primary collection, the Bored Ape Yacht Club, become the collection with the highest floor price in the nascent NFT space. However, even as prices soared, Yuga Labs mainly remained in the shadows, throwing a couple of big parties for BAYC holders and airdropping the MAYC and BAKC collections.

Then a Yuga Labs leader said Q1 in 2022 would be “crazy” for BAYC holders. And it has turned into just that. First, there was the acquisition of blue-chip NFT projects CryptoPunks and Meebits from Larva Labs. Then there was the $APE coin drop, which made BAYC holders tens of thousands of dollars richer in a single morning.

Finally, Yuga Labs had a massive funding round, prepared for a metaverse land drop of 200,000 parcels, and completed a merch drop to BAYC holders.

Yuga Labs’ 2022 moves have made headlines in more than just Web3 publications but also mainstream media. Time will tell how things pan out for Yuga Labs, but there’s no doubt it’s building for the future and leading the NFT space in the process.