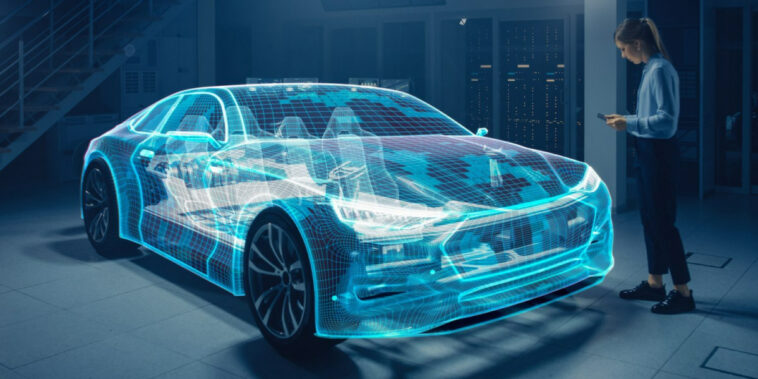 Two of Japan’s top automakers announced they are now using metaverse technologies in their business models. While Nissan and Toyota are both using technologies like virtual reality (VR) and augmented reality (AR), they seem to have different goals with their metaverse endeavors.

According to initial reports, Nissan is most interested in using the metaverse to enhance the customer’s experience. For instance, the Yokohama carmaker recently unveiled a metaverse showroom on the platform VRChat.

Based on the company’s official Nissan Crossing in Ginza, this new virtual space highlights Nissan’s eco-friendly Ariya line. Visitors to the virtual Nissan Crossing can get a preview of upcoming cars and learn about Nissan’s commitment to environmentalism.

Nissan also revealed more details on its metaverse-focused “Invisible-to-Visible” (I2V) initiative. On Nissan Global’s website, the company defines I2V as a “3D augmented reality interface” that can identify data drivers can’t pick up in physical reality. The goal of I2V is to make the driver’s experience both safer and “more enjoyable.” Executives predict I2V will be fully integrated into Nissan models by 2025.

By contrast, Toyota appears to be more interested in using the metaverse to give its employees greater work flexibility. Japan’s largest automaker has already deployed VR-based workspaces for many of its divisions. Employees could use in-game avatars in these virtual offices to attend conferences and talk with co-workers.

Toyota’s leaders said the COVID-19 lockdowns were a significant reason they decided to create metaverse offices. Toyota also suggested its virtual workspaces would give new employees more opportunities to interact with multiple departments and senior management.

Global Carmakers are Speeding into Web3

Nissan and Toyota are far from the only automakers that see potential in the metaverse. Indeed, some rival companies like Hyundai have already jumped head-first into the metaverse and NFTs.

As Rarity Sniper recently reported, Hyundai is the first global automaker to develop an NFT community — complete with official Discord and Twitter pages. About one week ago, the South Korean car company released an ad highlighting its new partnership with the Meta Kongz NFT collection. Before its big Meta Kongz announcement, Hyundai released art NFTs for its Kia models, and it even opened a virtual Oilbank in the Zepeto metaverse.

Alfa Romeo is also a big supporter of using NFTs, but this Italian automaker isn’t as interested in creating digital collectibles for fans. Instead, the Alfa Romeo team is using NFT technology to verify their vehicles and keep track of each car’s maintenance. Recently, the luxury brand announced the 2023 Alfa Romeo Tonale SUV will come with NFT certification.

Whether it’s the metaverse or NFTs, carmakers are getting increasingly interested in the possibilities of Web3.